Clash has been billed as the ‘real final’ of tournament 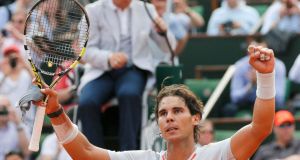 On a warm day that dulled the senses but not the reflexes or the perspective of the favourites, Rafael Nadal and Novak Djokovic cruised in different gears towards a semi-final tomorrow that has been billed as the “real final” of this French Open.

That might be harsh on Jo-Wilfried Tsonga or David Ferrer, who contest the other semi-final, but it reflects the almost universal view. Tsonga’s three-set win over Roger Federer on Tuesday briefly disturbed that perception and, for the first time since Tomas Berdych intruded on the 2010 final at Wimbledon, there will be a chance for someone else to stand tall in a major. But can either of those beat either of these? Tsonga has the better chance.

“The draw is what it is,” said Djokovic, who beat Nadal on clay in Monte Carlo. “I don’t want to talk about ‘what if’. We’re in a semi-final, I have a big challenge in front of me and I’m ready for it. We’ve played each other over 30 times. He’s lost only a few times since he came back and you’ve got to respect that.”

If there were any form-line to be drawn through their quarter-finals, it may be that Tommy Haas, the 35-year-old German who has rebuilt his career to stand at 14 in the world, gave Djokovic a harder time of it over three sets in two and a quarter hours than the 9th seed, Stanislas Wawrinka, did in just under two hours against Nadal.

Nadal was slightly more upbeat. “It was my best match of the tournament, without any doubt,” he said. “The numbers were good but the most important thing is the feeling. I’m happy.”

He might have bagelled the Swiss had an outrageous, flat-on-his-back volley at the net not inched wide in the sixth game of the third set. He settled for serving out to love to win 6-2, 6-3, 6-1 and had that muscular air of old about him. The Spaniard may be a slight favourite to repeat last year’s final, when he handled the overnight break in play better than Djokovic to win his seventh title.

Now the conditions are near-perfect for Nadal, a mild blast of sun having given his favoured red dirt more grip and bounce, with his top-spun forehands steepling into armpits again.

Nadal also embarrassed Wawrinka in the final set with brutal hitting down both flanks, some from outrageous angles, a few on the run, testimony to the solidity of his suspect knee. “Probably he was a little bit tired,” Nadal said, charitably. “I feel sorry for him – he’s having a great season. But I’m really happy the way I played today.”
Guardian Service