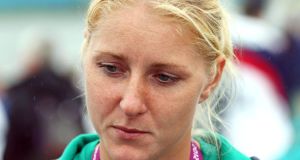 Of the five other Ireland crews, the lightweight double of Paul and Gary O’Donovan could prove surprise packets – but the draw for today’s heats has done them no favours.

Puspure’s draw is also potentially tricky. With competitors pulling out of the women’s single sculls because of illness, there will be just 11 starters, with the winners of two heats going directly to Sunday’s A Final and the rest bound for repechages.

Puspure, a bronze medallist last year, looks the top tip in her heat (12.10 Irish time), which also features Britain, Germany, Poland, Switzerland and Lithuania. However, she is a competitor who improves with racing, and a semi-final might have helped her. The other heat has Olympic and European champion Mirka Knapkova and Olympic silver medallist Fie-Udby Erichsen.

“I’ve never won a European medal,” said Jennings as she looked forward to this event. She is a former world champion and World Cup medallist in the lightweight single scull.

Her progress to Poznan has been tortuous, featuring a broken rib and a two-race shootout with Siobhán McCrohan, the first a dead heat. A European medal come Sunday could put her back on track for her primary aim: a place in an Olympic-class boat and a shot at a medal next year in Rio.

Olympic ambitions are also what drive on the women’s double of Lisa Dilleen and Helen Hannigan (having their first competitive outing together), the lightweight double of Claire Lambe and Denise Walsh and the women’s pair of Leonora Kennedy and Monika Dukarska, who is returning to the area where she grew up. All have good heat draws and may avoid repechages.

The O’Donovans take on Greece and France, two of the fastest crews of recent seasons, in their heat – with just two crews progressing directly to the semi-finals.

In Ireland, Carlow regatta takes the spotlight on Saturday and Sunday. Carlow Rowing Club may be the most vibrant in the country, with 100 rowing members, most of them juniors. There are 21 entries in the junior 16 single sculls – a record for this event. There are also races for touring boats.