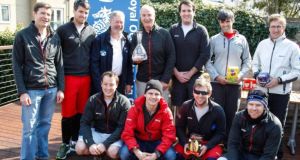 individual sailors have raised objections to the new quay which they say will ‘destroy sheltered waters where generations have learned to sail’.

The company has unveiled the €18m proposal on the cusp of the summer season, drawing the ire of a 5,000-strong sailing and boating community.

The plan is to facilitate some of the world’s biggest cruise liners berthing inside the harbour directly in front of the yacht clubs at Ireland’s biggest sailing centre. The aim is to regenerate the harbour and town following the loss of the HSS Stena car ferry between Dun Laoghaire and Holyhead in February.

A public consultation is underway following DLHC presentations with over 20 separate stakeholders groups and a company study that says this year’s cruise visits could generate €7 million.

Over 1,500 sailors have now signed an online petition ‘Save Dun Laoghaire Dinghy Sailing’ set up by Laser sailor Peter Doherty, who claims the plan would cut the harbour in half for sailing purposes. The petition is available here: www.change.org/p/dun-laoghaire-harbour-company-save-dun-laoghaire-dinghy-sailing

A total of 22 cruise ships are expected to berth this summer, bringing up to 100,000 passengers and crew to the port.

The Dublin Bay Sailing Club (DBSC) summer programme that starts at the end of this month provides racing three times a week for a combined racing fleet of over 200 boats and some 1,200 sailors. While most of this racing occurs out in the bay, sailing inside the harbour walls, by sailing schools and yacht clubs, is an important resource for tuition including weekly racing by a vintage fleet of up to 30 Water Wag dinghies.

The company – a state owned commercial entity – says the development of the new cruise berth facility is essential to bring new business.

The plan will involve the construction of a new quay wall and dredging of the harbour to facilitate ships up to 300 metres in length, (twice the length of the former HSS ferry) which cannot be currently accommodated anywhere else in Ireland other than Cobh in Cork.

But company chief executive Gerry Dunne says a study expects a €7 million spend from the 22 visits this year, 30 per cent of which is to be spent in the Dun Laoghaire area. An audit of each cruise visit this summer will be conducted.

Royal Cork’s Anthony O’Leary’s defended his RORC Easter Challenge crown on the Solent last weekend but this year the sole Irish crew faced a new challenge having exchanged their Ker 39 – which has twice taken them to Commodores’ Cup victory – for Marc Glimcher’s red-hulled Catapult, the ‘big boat’ in their winning team last year. O’Leary made short work of UK opposition in IRC one division. The assymetric boat returns to home waters for June’s Dun Laoghaire to Dingle offshore race.

A reported 620 recreational sailors were rescued by Irish lifeboat crews in the last five years and now the RNLI is service seeking sailors’ help in a safety survey. The RNLI is asking people to log on to www.rnliyachtingIreland.substance.coop and complete the 15-minute survey.