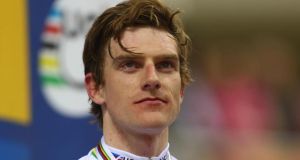 A project to develop Ireland’s first indoor velodrome is set to be unveiled this week with a 250m international standard track planned for Dundalk.

Last February Martyn Irvine became the first Irish elite track world champion in 117 years when he won the scratch race at the world championships in Minsk.

Irvine’s success, plus the strong performances of others such as world number one individual pursuit rider Caroline Ryan, European track championship bronze medallist Ryan Mullan and Ireland’s paracycling competitors, have increased the focus on track racing, helping the current push for a velodrome.

The Irish Times understands the project is an evolution of an earlier plan put in motion by the local Cuchulainn club and that it has secured support from other parties. The track would be housed in a pre-existing building, with full details to be released this week.

Some funding is understood to be in place, while other funds will be secured over time. The track could be in operation as soon as September of this year, which would be a massive boost for the sport in this country.

Ireland currently has outdoor tracks in Dublin, Belfast and Kanturk, but no covered velodromes.

Significance
The higher quality of the planned project, plus the fact that riders would be shielded from the elements, would make the venue of very high importance for all Irish riders. The significance of an indoor velodrome would be similar to that when Ireland got its first 50m swimming pool.

Currently Irvine, Ryan and others have to travel abroad to prepare for international competition.

In addition to the benefits for international performers, domestic-based riders and beginners would also benefit.

In February of last year the Cuchulainn club was given planning permission by Dundalk Town Council to build a 250m outdoor velodrome, a 360m BMX track and a pump track at Hoey’s Lane, Dundalk.

Separately, Cycling Ireland had been trying to find a location to install its own track. That ran into difficulties, prompting the federation to push for a velodrome in the Abbotstown sports complex.

Several months
However, there are no indications that the latter would happen anytime soon, while the reworked Dundalk project could be up and running in several months. This would depend on remaining funds being secured.

Irish cycling is going through a wave of success and growth at present. In addition to the country’s successful track riders, road cyclists such as Dan Martin, Nicolas Roche, Philip Deignan and Sam Bennett have all taken significant steps in the past year.

2017 winner Ostapenko returning to form in French Open 14:15
Oisin Murphy denies taking cocaine after failed drugs test in France 13:55
Manu Tuilagi out for six months with a torn achilles 12:58
Jacob Stockdale named at 15 as Ulster go again in Pro14 12:37
Johnny Sexton captains Leinster against the Dragons 13:25
Here is your handy guide to sport on television this week