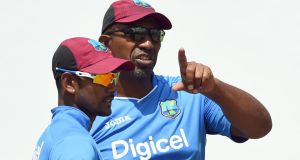 Phil Simmons has been restored to his role as West Indies head coach after publicly apologising for the outburst which led to his suspension in September.

The West Indies Cricket Board punished Simmons for revealing the voting of individual selectors ahead of the tour to Sri Lanka in October and November.

The 52-year-old was particularly aggrieved at the continued absence of all-rounders Dwayne Bravo and Kieron Pollard, saying he was not getting the “best 50-over ODI squad” available to him.

Eldine Baptiste, a member of the WICB selection panel, took charge of the Windies in Simmons’s absence and presided over a 4-0 ODI whitewash defeat, having already lost both Tests.

Former Ireland coach Simmons has now been reinstated conditioned upon “issuance to him of a letter of reprimand for his inappropriate public comments” and “making a public apology to the WICB and persons whom he may have offended”.

Simmons said: “I regret my public outburst during a press conference on 25 September, 2015 in Barbados called to announce the West Indies Cricket Board men’s senior team selected to tour Sri Lanka in October and November 2015 and the revelation of the voting that took place in the team selection meeting.

“I extend a public apology to all whom I may have offended. I have personally apologised to my fellow selectors and the West Indies Cricket Board, and now do so again publicly.

“I am looking forward to putting this behind me and doing the job I enjoy with the West Indies senior men’s teams to continue heading towards the goal that we have inside and towards which we have started working.”

Simmons said he had the backing of chairman of selectors Clive Lloyd over the reinstatement of Bravo and Pollard, neither of whom have been considered for ODI selection since being dropped for the series in South Africa in January.

However, according to Simmons, he and Lloyd were outvoted by the other selectors on the panel.

The WICB added: “Going forward, and as a separate matter, the WICB will immediately investigate the allegations made by Simmons, and take the necessary and appropriate action following this investigation.”