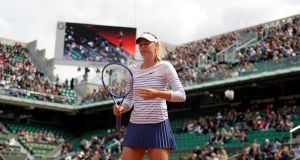 Maria Sharapova’s French Open defence is over after she was beaten in straight sets by Lucie Safarova. Photograph: Epa

Czech fourth seed Petra Kvitova was sent packing from the French Open when she lost 2-6 6-0 6-3 to Swiss Timea Bacsinszky in the fourth round on Monday.

It was the second victory in as many matches against Kvitova for the 23rd seed, who will face Belgian sensation Alison van Uytvanck for a place in the semi-finals.

Bacsinszky was given the run around by Kvitova in the opening set but once she got into her groove, the 25-year-old, whose career has been hampered by a foot injury, could not be stopped.

Double Wimbledon champion Kvitova, who reached the semi-finals at Roland Garros in 2012, broke back for 3-3 in the decider but Bacsinszky won the next three, sealing victory when the Czech made a forehand error.

Maria Sharapova’s defence of her French Open title also came to a premature end on Monday when she was upset 7-6, 6-4 by the Czech left-hander Lucie Safarova in the fourth round. The Number two seed, who won the title here in 2012 and also reached the final in 2013, struggled with a cold and cough but was outplayed by a brilliant Safarova, who is into the quarter-finals here for the first time.

It was a disappointing end for Sharapova, who warmed up for Paris by winning the title in Rome for the third time in her career. But though she was clearly functioning at less than 100 per cent, Safarova fully deserved her victory, never allowing her opponent to dominate from the baseline. Taking the ball early and whipping up some wicked angles from her wristy forehand, the Czech held firm under pressure and clinched victory with yet another forehand winner, one of 34 winners in total.

Sharapova had won five of their six previous meetings but she struggled right from the start, dropping serve as Safarova moved ahead 3-1. Sharapova broke back for 3-3 but never looked entirely comfortable and when the set reached a tiebreak, it was Safarova who dominated, winning it 7-3 to move ahead.

When the Czech took a 3-0 lead in the second, the match looked over, but a double-fault let Sharapova back on serve at 3-2. In the next game, Safarova missed a golden chance to break again when she put an easy forehand wide and Sharapova held. The two stayed on serve to 4-5 when Sharapova, serving to stay in the match, double-faulted to hand the Czech a match point.

A brilliant defensive lob from the Russian, followed by a netted forehand, saved the match point but two stunning forehands gave Safarova a first ever win over a reigning world No1 and set up a clash with Garbiñe Muguruza of Spain. Muguruza beat Flavia Pennetta of Italy 6-3, 6-4 to make the last eight for the second successive year.

“I felt like I had small openings,” Sharapova said afterwards. “I played a few good points, I just wasn’t able to keep that level up today. She was able to do that for a longer period of time. She was the much more aggressive player. She took the tie away from me, created her angles and I didn’t. That was the difference today, in my opinion.”

The Russian refused to blame illness for her defeat. “I don’t like to talk about it, and I don’t think it really makes a difference. I’m still a competitor no matter what. You know, I’m going to do everything in order to go out and give it my best, and I think I did the best I could. Today it wasn’t enough, because my opponent had a different gear than I did. I was still there and I still competed, but it wasn’t enough.”