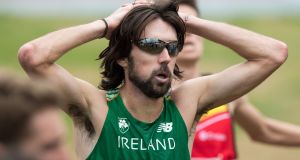 Mick Clohisey finished 10th in the Seville Marathon, his time of 2:15:10 making him the second-fastest Irish qualifier to date for the Rio Olympic Games. Photograph: Sasa Pahic Szabo/Inpho

So the plot thickens on Ireland’s Rio Olympic marathon qualifiers, with Mick Clohisey improving his chances of selection by running 2:15:10 when finishing in 10th position in Sunday’s Seville Marathon.

This now makes him the second fastest men’s qualifier to date – with each country able to send a maximum of three. Raheny Shamrocks runner Clohisey was previously ranked third fastest with the 2:15:35 he ran in Berlin last September, which means Sergiu Ciobanu now drops to third-fastest with his 2:15:15, also run in Berlin.

Paul Pollock, who has run 2:15:38, is targeting the London Marathon in April with a view to putting himself inside the top-three times, all which means Athletics Ireland is facing an increasingly tough selection dilemma. Kevin Seaward, who ran 2:14:52 in Berlin, remains in pole position for selection.

Also throwing her name in the hat for women’s selection is Gladys Ganiel, who ran 2:38:53 in Seville, inside the necessary 2:45:00, while Barbara Sanchez ran 2:39:49, although she had already qualified. Already with the women’s marathon standard are Lizzie Lee, Fionnuala McCormack and Briege Connolly.

Ciara Mageean – also Rio bound in the 1,500m – underlined her excellent indoor form with her second Irish record in a fortnight, this time over the mile, when running 4:28:40 when finishing sixth at the Millrose Games in New York.

For Mageean, who already broke the indoor 1,500m record, this improved the previous Irish women’s indoor mile record of 4:30:5, which had stood to Róisín McGettigan since 2009.

Also performing with distinction over the weekend was Mark English, who was just short of his own Irish indoor 800m record when running 1:46:99 at the Glasgow International meeting, not far outside his Irish record of 1:46:82.

English finished second to his old rival Adam Kszcot from Poland, who took the win in 1:46:23, a season’s best