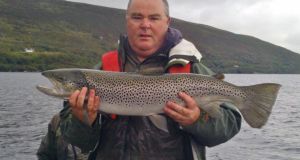 Galway hooker: Toby Bradshaw from Galway with a trout of 5.5kg (12lb) caught on Lough Sheelin on a Green Peter . 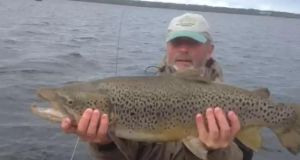 Galway hooker: Toby Bradshaw from Galway with a trout of 5.5kg (12lb) caught on Lough Sheelin on a Green Peter .

AS WITH a good wine, it was worth waiting for. The penultimate, ex- tended, week of the game-angling season witnessed two of our finest trout fisheries in counties Kerry and Cavan produce record-breaking trout.

On Lough Currane in Waterville, Paul Lawton from Cork caught and released a fantastic hen sea trout of 6.69kg (14.75lb) fly-fishing at the Black Rocks near Tub Island with local angler Liam Ellis and Peter Muldoon, from Cork. The fish was 89.5cm long with a girth of 45cm.

IFI’s Dr Willie Roche, commented: “The estimate from this latest specimen is based on length and weight information from 57 sea trout from the system over the past three years. Currane is the most consistent producer of large sea trout for many decades.”

On the Sheelin
It was a similar story on Lough Sheelin with superb brown trout catches reported on all days which included the heaviest fish of the season landed and released by Galway angler Toby Bradshaw.

This beauty weighed in at over 5.5kg (12lb) and submitt-
ed to a size-10 Green Peter about 500 yards north-east of Church Island. Toby agreed with fishing partner Joe Creane’s comment: “Never has a fish, be it a brown trout, sea trout or salmon given us such cause for delight. But perhaps the best sight was to see him swim off after his visit to our hands.”

Last weekend, the Lough Sheelin Trout Protection Association hosted its annual Stream Rehabilitation competition on the lake. The popular competition this year saw an increase in participants to an impressive 274 anglers.

Sheelin in its own special way left nobody disappointed as more than 50 fish were weighed in with all anglers seeing plenty of trout on the move. The top 20 tipped the scales at over 1.3kg (3lb) with the overall prize going to local man Frank Kelly with a fish of 2.3kg (5lb), caught on a Green Peter Hedgehog.

“There was great comradeship and good humour throughout the day and all proceeds are invested back into the rehabilitation and enhancement of rivers within the Sheelin catchment,” according to IFIs Brenda Montgomery.

Meanwhile, trout rose freely to flies and appeared hungry as if wanting to stock up on lake feeding before their annual journey. The western shore by Plunkett’s Point and Orangefield fished very well but around Church Island, Lynch’s Point, Kilnahard and Crover also featured.

Plenty of small fish showed in the middle of the lake but for the bigger weights, anglers kept along the shore and sheltered bays. Most popular flies for the week included the Green Peter, Daddy Long Legs, Sedges, Octopus, Cock Robin, Sooty Olive and Dabblers.

Fin was part of a group from bissclips.tv, Germany’s most popular online angling channel. The group concentrated on the area’s many prolific pike waters but also fished for sea trout in the nearby Moy Estuary. Angling journalist, Holger Bente, who was leading the group, had a personal best with a 101cm fly-caught pike, describing the fishing in the Foxford area as outstanding.

Five anglers from each heat will qualify for the final and angling equipment prizes will be presented to the first three in each heat and first five in the final. Entry fee is €20 with fishing from 10am until 2pm. Entries to Brian Nally at 086-259 8563.

Specimen hunters submitting claims to the Irish Specimen Fish Committee (ISFC) for cyprinids, cyprinid hybrids or shad should send claims and supporting scale samples for genetic identification to the ISFC by 15th October.

“Genetic analysis takes a considerable amount of time, so scales must be submitted before the deadline to ensure they will be processed in time,” an ISFC spokesperson said.