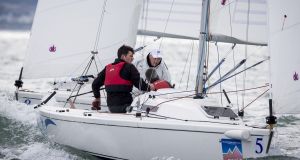 The silver salver trophy of the original Irish Dinghy Racing Association bears the engraved names of each winner since 1947, when the race was first sailed. The O’Leary family will now feature six times, all since 2008.

O’Leary was joined by Atlanta ‘96 Olympian Dan O’Grady from Howth and triathlete Cian Guilfoyle from the National YC.

He was closely pursued by Howth’s Cillian Dixon, the helm on his club’s youth team who won the ICRA Class 4 national title at the Sovereigns Cup in June.

Alex Barry of Monkstown Bay Sailing Club, the RS400 national champion, topped the morning flight with three consistent second places. Those top boats were to form the leading pack in the final yesterday.

That set the scene for race two and O’Leary took the bullet this time. He followed with another second place and then another win in the fourth race.

“We definitely sailed better this time than last year,” O’Leary said afterwards. “We were comfortable out there and it was a great series.”

Barry went on to score 3-4-3 and took second overall, five points adrift of O’Leary. In fact in the final three races it was Dickson who had the edge but his opening race fifth place cost him dearly and he took third overall by one point from Barry.

Other notable performances over the series included Sutton Dinghy Club’s Alan Henry for the IDRA14 class, who qualified for the final on Saturday without recourse to the repechage and placed seventh overall in the final.

Classic dinghies had other representation in the final when Rush Sailing Club’s Patrick Dillon for the Mermaid class won a place in the final and was sixth overall.