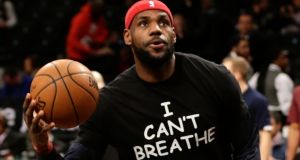 Cleveland Cavaliers forward LeBron James is seen wearing a ‘I CAN’T BREATHE’ tee-shirt while he warms up before game time against the Brooklyn Nets during their NBA game at Barclays Center in Brooklyn, New York, USA, 08 December 2014. Photograph: Jason Szenes/EPA

No fines or reprimands will be handed down to LeBron James, Kyrie Irving and others who wore “I Can’t Breathe” shirts during warm-ups for a Cleveland Cavaliers-Brooklyn Nets game on Monday night, National Basketball Association sources said on Tuesday.

NBA Commissioner Adam Silver said he supports players voicing their opinions on social issues but would prefer they abide by the rule that stipulates players wear clothing made by Adidas, the league’s official apparel provider.

The shirts were a gesture of solidarity with the family of Eric Garner, the 29-year-old unarmed black man who died in July after being restrained in a chokehold by a New York City police officer.

About 200 protesters were outside the Barclays Center in Brooklyn on Monday night, chanting “I can’t breathe,” and “Hands-up, don’t shoot,” a reference to Michael Brown, an unarmed black teenager shot by police in August in Ferguson, Missouri, despite some eyewitness accounts that he had his hands up.

Wearing the shirt, James said, was “a message to the family that I’m sorry for their loss.”

“Violence is not the answer, and retaliation isn’t the solution,” James said. “As a society, we know we have to get better. It’s not going to be done in one day. Rome wasn’t built in a day. We know that. But we all have to do better.”

The game was even more high-profile than usual as Britain’s Prince William and his wife, Kate, were in attendance at the Brooklyn arena.

Irving, James’ two-time All-Star teammate on the Cavaliers, also wore the shirt during warm-ups, as did four Nets players: Kevin Garnett, Deron Williams, Jarrett Jack and Alan Anderson. Irving said he would protest even if he wasn’t an NBA player.

“It was one of those things that I felt I wanted to be part of and take a stand,” he said.

Since the protests against police tactics erupted after the Brown shooting, athletes have become more involved. Five St. Louis Rams held their hands up while being introduced two weeks ago in a tribute to Brown.