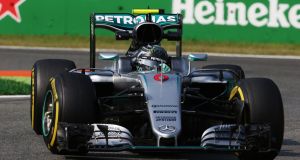 Nice Rosberg came out on top in the opening practice session ahead of the Italian grand prix. Photograph: Getty

Nico Rosberg led the way in opening practice for the Italian Grand Prix ahead of his title rival Lewis Hamilton.

Rosberg, who has never won at Monza, finished two tenths of a second clear of Hamilton with Kimi Raikkonen and Sebastian Vettel third and fourth for Ferrari in front of the team’s home crowd.

Hamilton, 31, holds a nine-point advantage over Rosberg in the championship race and has won here in each of the previous two seasons.

Last year the British driver, who is just one triumph shy of 50 grand prix victories, topped every practice and qualifying session before sealing an emphatic lights-to-flag win.

But at the so-called Temple of Speed on Friday, Hamilton was slower than Rosberg’s best lap of one minute and 22.959 seconds.

As has largely been the trend this season, Mercedes — Formula One’s all-conquering team who have won all but one race this season — were comfortably faster than the rest of the field. Indeed no other team was within one second of Rosberg.

Force India’s Sergio Perez was fifth fastest ahead of Haas driver Romain Grosjean. Max Verstappen, who insists he will not adapt his racing approach despite courting criticism for his aggressive tactics in Belgium on Sunday, finished ninth in the order.

Jenson Button trialled the Halo — the cockpit protection device which will not be introduced until 2018 at the earliest — for the first time on Friday. The 2009 world champion, who will see his McLaren fate for next season determined this month, was 11th in the order while his team-mate Fernando Alonso posted the 13th best time.

Felipe Massa announced he will retire at the end of the season in an emotional press conference on Thursday, and he was 14th here in practice.

British rookie Jolyon Palmer was 21st ahead of his Renault team-mate Kevin Magnussen who has been given the all-clear to race this weekend following his huge shunt in Belgium last Sunday.