Navardauskas lifts the gloom for Garmin 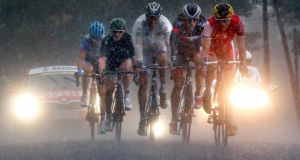 A group of breakaway riders pedal through a rain storm near the town of Condom in the Pyrenees mountains during the 19th stage of theTour de France cycling race between Maubourguet and Bergerac.Photograph: Jacky Naegelen/Reuters

Cycling’s equivalent of the curse of Hello! magazine seems to have struck the cyclists who shook the Duchess of Cambridge’s hand before the official start of this Tour de France outside Leeds. Seven of the field were honoured in this way – the previous three winners, the world champion Rui Costa, and all three British entrants as well as Chris Froome. Of the sextet, only Geraint Thomas remains in the race.

Thomas, however, refuses to buy into the idea of a curse of Kate. “Nah, it doesn’t worry me. It’s kind of a strange thing, a curious little fact, but I’m not that superstitious.”

Whatever the background, Thomas’s boss Dave Brailsford does not believe the absence of Froome and Contador should deflect from the impending victory of the Italian Vincenzo Nibali. “He’s the best rider here. Everybody started the race: it’s not fair to say there was nobody here.”

However, with Contador and Froome sidelined, Nibali has at times led a one-horse race. Even so, he is not the favourite for Saturday’s 54km time trial, over the reverse of the course where Miguel Indurain pulverised the 1994 race. As the peloton slithered and splashed its way here, several kilometres from the finish, the German Tony Martin could be seen slipping off the back of the string, to save his legs for today.

Winner last year of the contre la montre at Mont St Michel, the world time-trial champion has every chance of landing a second stage this year after his solo victory in the Vosges two weeks ago.

The other contender is French. Jean-Christophe Peraud of the Ag2R team is a former national time-trial champion but he will be spurred on by the chance of taking second or third place overall and becoming the first Frenchman to finish on the podium since Richard Virenque in 1997.

If Nibali is well clear, the next eight places are up for grabs. Peraud, Alejandro Valverde and Thibaut Pinot are separated by only 15 seconds in the battle for second and third overall, while Tejay van Garderen may overtake Romain Bardet of France for fifth. Laurens ten Dam, Bauke Mollema and Leopold Konig will fight out seventh to ninth places.

At the start of the 208.5km stage, 14 of the 22 teams in the race had yet to win a stage. The pressure was immense, as the directeur sportif of the Garmin-Sharp team, Charly Wegelius, admitted; Garmin is at the end of a Tour which their leader Andrew Talansky was forced to abandon due to injury, while their New Zealander Jack Bauer was caught in the final 25 metres of the stage to Nimes, just seven pedal strokes from victory.

Garmin finally earned something for their efforts. Their Dutchman Tom Jelte Slagter was the last of the day’s early escapees to be scooped up by the peloton, and their Lithuanian Ramunas Navardauskas sprang clear as Slagter was brought to heel on the day’s only climb, the drag to Montbazillac, 13km from the finish.

Usually such late attacks are doomed, but “the Honeybadger” as Navardauskas is known, made his own luck, as the roads were like glass, and the chase was disrupted by the inevitable crash at a key moment just before the 3km-to-go mark.

As a 15-strong splinter group led by John Degenkolb lined up for the finish, Navardauskas anded Lithuania’s first stage win at the Tour, to his and Garmin’s intense relief. Meanwhile, Nicolas Roche will reach the end of the 2014 Tour de France on Sunday, having ridden well in support of his team but in a way that he didn’t expect to at the start.

Roche had been due to back up leader Alberto Contador; after the Spaniard crashed out, the Tinkoff Saxo team’s focus turned to chasing stage wins instead.

It took two with Rafal Majka and one with Michael Rogers. Roche tried to help Daniele Bennati to a sprint victory yesterday, driving the peloton’s pace in the final kilometres in an attempt to bring back Navardauskas.

However the momentum was lost when a large crash took down several riders in the bunch, including some of the key sprinters.

Navardauskas stayed away and Bennati had to be satisfied with fifth place.

Roche was delayed in the crash and rolled in 51st, but was given the same time as Bennati and the other sprinters who finished seven seconds behind the stage winner.