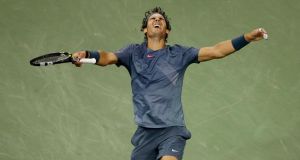 When they embraced at the net, Rafael Nadal momentarily rested his head on Novak Djokovic’s shoulder. This was classic Nadal, killing another opponent with kindness.

Nadal snatched the US Open from Djokovic just when his opponent thought he was in control of a fierce men’s final late on Monday night.

Then Nadal told him, “You are an amazing player – you will finish your career as one of the best in history.”

Left unsaid was that it would not be anywhere near the same transcendent level as Nadal, if only because Nadal would never say such a thing.

Rare is the competitor with his on-court persistence and postmatch elegance. Such a combination cannot be easily understood or explained, mainly compared to the very best of athletes worldwide.

Footballer
David Beckham, who signed autographs during changeovers of Nadal’s 6-2, 3-6, 6-4, 6-1 victory over Djokovic, probably wondered what kind of footballer Nadal might have been for Spain.

David Stern, the NBA commissioner who witnessed this vintage Nadal performance courtside, no doubt recognised that special brand of athlete he profited from so much during the Michael Jordan years.

You take nothing for granted against a player from this special mold. Late in the third set, Djokovic had triple-break point to serve for a two-sets-to-one lead. The next thing he knew, Nadal had held serve and broken him for the set.

“I obviously could not recover,” Djokovic said.

The match and Nadal’s 13th Grand Slam tournament victory were essentially in the bag.

The European Late Show, which started about a quarter after 11 in Djokovic’s Serbian homeland and Nadal’s Spain, ended early, by their standards, in a mere 3 hours, 21 minutes.

It was 2:32 sooner than their record-setting five-set marathon final at the 2012 Australian Open, won by Djokovic.

They also played a 4:37 French Open final in June, won by Nadal. At this point, fans do not just go to a Grand Slam match between Djokovic and Nadal. They pack a toothbrush and a change of underwear. They commit to an evening of tennis as a wrenching war of attrition.

And perhaps some sceptics find themselves wondering how contemporary sport can scale such physical and recuperative barriers without resorting to chemical shortcuts.

“When you love what you make, you always try to improve,” Toni Nadal, the newly crowned champion’s uncle and coach, said outside the locker room after the match. He was not talking about the financial rewards, though the $1 million bonus Nadal will take home with the €1.96 million in prize money will be happily deposited in the bank.

Once upon a time, Nadal was a clay-court teenage phenomenon. Then he developed a better-than-average serve, the ability to win points at the net and soon he was a two-time Wimbledon champion.

After losing in the first round at Wimbledon, Nadal proceeded to run the hardcourt summer table, winning in Montreal, Ohio and New York.

To reduce the physical stress, he hit riskier forehands down the line rather than play them the safer way, cross court.

Against Djokovic, he won his share of the longer points, too, including one that lasted a head-spinning 54 strokes.

“He can’t run like when he was young,” Toni Nadal said with surprising candour. “And when you have some problems, you know you should make something different.”

You evolve. You grow. What does not change is Nadal’s demeanour, win or lose. If Roger Federer has been tennis’s Tiger Woods, inspiring awe, then Nadal has been its Phil Mickelson, seemingly unencumbered by the weight of it all. He will not even go so far as to say his generation of players, almost universally credited for raising the qualitative bar, is more special than any other.

“I don’t like to talk about a part of the history of tennis where I am involved because it’s going to sound very arrogant if I say this era is great,” he has said.

“We had a lot of fantastic years in tennis. I think this era is special because the best players of the world have the ability to be in the final rounds of most of the tournaments. That’s created a lot of classic matches, good battles.”

In the shadow of his shared narrative with Federer, his rivalry with Djokovic is slowly creeping into the discussion of the greatest. Monday night’s final was their 37th match, six more than Nadal has played against Federer. Federer-Nadal remains the industry standard, especially with Nadal now four behind Federer’s 17 Grand Slam single titles.

A lot of years to play
“Well, 13 Slams for a guy who is 27 years old is incredible,” Djokovic said. “He still has a lot of years to play, so that’s all I can say.” That was more than Nadal would say on the subject of the longer view. “I go step by step, day to day, week by week,” he said. Or point by point.

It is why Nadal, the long-crowned king of clay, has a real chance to establish an all-courts monarchy for the record book. Bet against him with extreme caution.
– (New York Times Service)