Murphy makes do with silver lining at ISAF World Cup 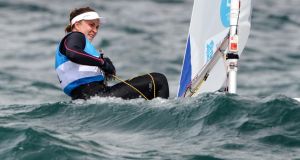 In spite of winning four straight silver fleet races, Annalise Murphy failed to qualify for the gold fleet at the ISAF World Cup in France this week, and the disappointment in missing the cut highlighted an inconsistency that must be ironed out if the UCD student is to realise her Olympic ambition in 2016.

Two days of light winds on Monday and Tuesday exposed weaknesses for the 23-year-old Dubliner, who finished fourth at the London Olympics, but was relegated to the back of the 55-boat Laser Radial fleet in Hyeres.

The flukey French breeze has been humbling for more sailors than Murphy.

It is certain the Chinese gold medallist Liljia Xu will not mark her return to the Olympic circuit with an expected win when the World Cup concludes tomorrow.

Yet Xu and the rest of the top-ranked competitors, including Dutch silver medalist Marit Boumeester, did make the gold fleet.

Beyond the glowing publicity at home there is a need for a critical appraisal of Irish Olympic sailing efforts (with a positive bias). Murphy is Ireland’s best hope for a sailing medal so she deserves all the specialist support she needs.

Murphy’s task is to confront performances in the less than 8-knot zone – the conditions forecast for the 2016 Olympic venue in Rio.

Solving the problem
Whether it is to do with starting technique, decision-making, boat speed issues or mental attitude, now is the time to put all resources into solving the problem, preferably starting next month at the Eurocup in the Netherlands.

It wasn’t all bad news in the Cote D’Azur: Murphy dominated the silver fleet with two wins when breeze finally arrived on Wednesday and did the same again yesterday in races four and five, displaying the world class heavy weather form she is now famous for.

The 2013 Dublin Bay Sailing Club summer season began last night from Dún Laoghaire and tomorrow the first race of a nine race ISORA summer series begins from the same port. The first course is a 50-mile race to Arklow and back.