‘Everyone is so into this drug mania. Everybody believes that if anybody runs wells they have to be on drugs. But the way I look at it, if you don’t want people to say things about you, go run real crappy and then nobody will talk about you’ 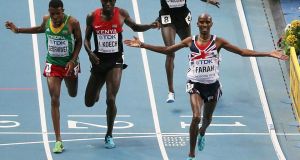 Britain’s Mo Farah wins the men’s 5,000 metres final at the World Championships at the Luzhniki Stadium in Moscow.

Time passes slowly up here in the mountains, which is a good thing, because there is no rushing the gentle music and seductive lyrics of Another Self Portrait. No wonder critics are suddenly united in rewriting their opinions, or at least in admitting they missed something first time around.

“What is this shit?” Greil Marcus asked, in his Rolling Stone review of the original and often ridiculed Self Portrait, released in 1970.

“What is this? This is terrific!” Marcus writes in the linear notes of the 2013 version, released today, and already streaming down the information superhighway. Indeed these 35 reissued songs – volume number 10 in the Bootleg Series – have prompted current Rolling Stone editor David Fricke to describe Another Self Portrait as “one of the most important, coherent and fulfilling Bob Dylan albums ever released”.

It’s all part of the game, when even the best critics are forced to swallow their pride and admit they were wrong. It’s been a bit like that with Rob Heffernan in the aftermath of his gold medal performance at the World Championships in Moscow. Suddenly, the critics are united, and even those who once ridiculed race walking, or argued that our athletes are, well, shit, are now declaring Heffernan a sporting triumph for the ages – which of course he is. The pity is that there is still valid criticism of the Irish athletics system, and whether Heffernan’s success in Moscow covers up the cracks in that system, or simply further reveals them.

Divisive opinions
Although this is nothing compared to some of the divisive opinions that suddenly surround Mo Farah and Usain Bolt in the aftermath of Moscow. Farah’s distance double – as brilliantly delivered as it was – has left some critics hailing him as the greatest British athlete ever, including, it seems, Sebastian Coe. “Farah is now beyond compare in the modern history of athletics,” Coe wrote this week, although in my opinion, Farah needs to break at least one world record to be even considered alongside the likes of Coe himself.

But that’s not really what’s dividing opinions on Farah: “We know we’re never going to test positive for anything, no way in the world,” said his coach, Alberto Salazar, in an interview this week, responding to those who – in their opinion – believe that Farah’s improvement in recent years must have something to do with performance-enhancing drugs.

“Everyone is so into this drug mania,” added Salazar. “Everybody believes that if anybody runs wells they have to be on drugs. But the way I look at it, if you don’t want people to say things about you, go run real crappy and then nobody will talk about you.”

Salazar (who never actually said “we don’t take drugs”) went on to talk about the anti-doping culture “so ingrained” at the Nike headquarters in Portland, Oregon, that Nike would “never ever condone or allow anything like that”, even if Lance Armstrong, Marion Jones, Justin Gatlin, Regina Jacobs, Tim Montgomery, etc – all Nike-sponsored athletes – somehow slipped through the net. So Salazar’s response, unfortunately, didn’t exactly stand up above the ordinary, and his explanation that Farah simply trains so hard that he “literally has to crawl off the track” actually begged the question: so how on earth does he recover?

Best defence
What is certain is that Farah, given his prominence within UK Athletics, has been as rigorously drug-tested as any athlete around, and the very fact that he’s not breaking world records might well be his best defence against the opinions of those who can’t believe he’s running clean.

Opinions on Jamaica’s drug-testing programme, meanwhile, are now very worryingly divisive, with Bolt inevitably caught up in the middle. This time it’s one of their own who’s stirring it up, and after seeing her country win six sprint titles in Moscow, the former executive director of Jamaica’s anti-doping programme – a Kingston woman named Renee Anne Shirley – told Sports Illustrated this week that she’s afraid, very afraid.“The current program,” she said, “while improved, makes a mockery of Jamaica’s posturing and flames suspicion more than it douses it.”

This “current programme” carried out only one out-of-competition test in the five months leading up to last summer’s Olympics; it has only one full-time doping control officer, and no whereabouts information officer, no accounting staff, and no financial statements for the last five years. When Shirley tried to highlight these issues “the worse the working environment became for me” so she resigned.

The response from both the World Anti-Doping Agency (Wada) and the Jamaica Anti-Doping Commission (Jadco) has only deepened the divide: Wada expected “the concerns to be addressed urgently and appropriately”, or else Jamaica might end up expelled from the Olympics, as highly unlikely as that is; Jadco pointed the fact that they administered the tests in June of this year which resulted in five Jamaican athletes testing positive, including Asafa Powell, and that Shirley was merely a disgruntled employee, her claims “an attempt to discredit their work”.

For now these are still just divided opinions, far from uniting the critics just yet, and nothing Farah or Bolt will be worried about, unless it ever comes to rewriting history. That will always demand conclusive proof, or the realisation there was a lot more going on than first suspected, just as there is now with Another Self Portrait.