Mitchell Johnson puts Australia in control of against South Africa

Fast bowler takes up where he left off against England 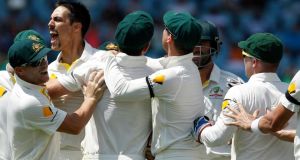 Mitchell Johnson picked up where he left off in the Ashes, taking four wickets as Australia moved into a strong position on day two of the first Test against South Africa at Centurion.

Johnson excelled in the 5-0 whitewash over England, claiming 37 scalps, and tapped into that same form immediately as the Proteas reached stumps on 140 for six.

That left the tourists 257 runs ahead and firmly in the driving seat after Johnson removed Graeme Smith, Alviro Petersen and Faf du Plessis in a fierce new ball spell before returning to account for all-rounder Ryan McLaren.

Earlier, Steve Smith reached his fourth Test century and Shaun Marsh finally fell for 148 in Australia’s 397 all out.

Australia added exactly 100 runs to their overnight tally, subsiding shortly after lunch as the hosts took their sixth wicket of the day.

Smith resumed on 91 and gathered the nine runs he needed for his first hundred against opposition other than England, but departed the following over without scoring again as McLaren found the edge of the bat.

Unlike Johnson, wicketkeeper Brad Haddin’s Ashes form eluded him as he followed for a duck, lbw to Robin Peterson.

South Africa continued pressing and finally dismissed Marsh, who passed his previous Test of 141 by seven runs before Vernon Philander had him held at slip.

Johnson and Ryan Harris ensured the Australia tail did not buckle, adding 43 runs in 11 overs with some entertaining strokeplay, only to fall within five deliveries.

Steyn clean bowled Harris for 19 and ended the innings by doing the same to Peter Siddle, while Johnson hit six boundaries in his 33 before Peterson struck again.

The Proteas’ response was only 10 balls old when Johnson sent Smith packing with a brutal bouncer that reared up to hit the bat handle and into the hands of a tumbling Marsh at slip.

Johnson’s third over yielded a second success, Petersen going hard at a wider one and feeding Haddin at the wicket, before he made it 23 for three with a world-class delivery at Du Plessis.

Clocked at over 93mph, his short ball was destined for Du Plessis’s helmet before the batsman managed to fend it away to a waiting Michael Clarke.

With Johnson out of the attack, South Africa attempted to rebuild only for Hashim Amla to play around a full ball from Peter Siddle and fall lbw on review.

AB de Villiers showed he had the guts for the fight when he pulled the returning Johnson over fine leg for six and his partnership with JP Duminy took the score into three figures.

Duminy had contributed 25 when he attacked spinner Nathan Lyon and instead succeeded in picking out Johnson, whose memorable day continued with a smart one-handed catch.

His third spell continued the theme as he clattered McLaren’s off stump, but De Villiers held firm to reach stumps on a gritty 52 not out.