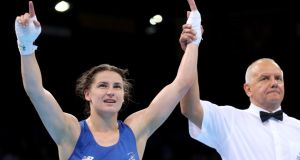 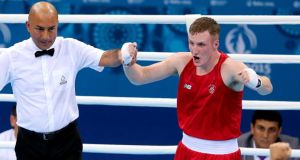 Another brilliant spike in the already high performance of Irish boxing means Katie Taylor is not the only one leaving Baku with next year’s Olympics fast approaching.

Not many people get to upstage the Bray fighter, but 90 minutes after Taylor’s victory Michael O’Reilly certainly got to share the limelight, winning Ireland’s second gold medal in what was arguably the fight of the night inside Baku’s Crystal Hall.

With only 403 days to go, it’s as if they both simultaneously pressed the countdown clock on the Rio Olympics, even if both still need to qualify. For Taylor, that process won’t begin until next February at the 2016 Women’s World Boxing Championships in Kazakhstan.

One of the many glaring imbalances of these European Games is that while some events aided in Olympic qualification, others didn’t, including women’s boxing. It doesn’t matter how many titles she’s won, Taylor has to stand in line and earn her place in Rio.

Indeed Taylor, who turns 29 next month, had to call on all her greatness to win this gold medal, if not so much in her final bout against Estelle Mossely from France, then certainly in her semi-final bout, the split decision victory over Azerbaijan’s Yana Alekseevna.

By the time the Olympics roll around she’ll be 30, and if Taylor defends her World title Kazakhstan, she’ll be seeking a 20th consecutive major championship title in Rio.

“Well, I am actually getting hungrier for medals all the time,” said Taylor.

“I think every competition is getting tougher, and because I’m the champion, they always want to raise their game against you, so I have to continue to improve and up my game. I think some people at home think I just stroll through these competitions, but every fight is hard fought, and hard won.

“I felt a lot of pressure here this week, as always, during any competition, and I’m delighted to be European Games champion, as well as Olympic champion, and European and World. I’ve got every single major title out there, so it’s great to add this to the list.

A fitting comment indeed, given the ostentatiously lavish hosting of these games by the Azerbaijani government. Their sports-mad president Ilham Aliyev was present for both Taylor and O’Reilly’s fights, the latter denying local favourite Xaybula Musalov a gold medal.

Not many people gave the 22-year-old from Portlaoise much hope, although O’Reilly himself clearly did, as he delivered a stunningly consistent three rounds of fearless punching.

The decision was unanimous, and O’Reilly does get the bonus prize of automatic qualification for the men’s World Championships in Doha, Qatar in November – the first Rio qualifier.

“Well, it gives me the chance to qualify for Rio, anyway,” said O’Reilly, when asked if this gold medal might just be the start of something bigger.

“I knew I was the underdog, but that only makes me more confident to get in there, and compete with them and beat these lads. I’m just a confident chap. But watching Katie in my warm-up, seeing her on the podium and hearing the Irish anthem, that just raised my excitement, to get where she was, on top of the medal podium.”

And in neither case, one suspects, for the last time.