Michael Conlan and Dean Walsh through to European quarter-finals 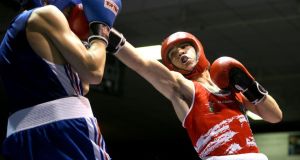 Ireland’s Michael Conlan is through to the quarter-finals of the European Elite Championships in Samokov, Bulgaria. Photograph: Dan Sheridan/Inpho

Michael Conlan and Dean Walsh advanced to the quarter-finals of the European Elite Championships in Samokov, Bulgaria today.

Ireland captain Darren O’Neill bowed out despite a massive performance against Russian No 1 seed Evegeny Tischenko, a World Elite silver medallist, in a 91kg battle of the southpaws.

Conlan, in his first fight at this level since the 2013 European Elite final, beat France’s Anthony Brett 30-27 across the board, the classy Belfast bantam switching from orthodox to southpaw for the entire contest.

Walsh progressed to the last eight on a unanimous decision (30-22, 30-27, 29-28) following a tough three rounds with Romanian light-welter Florentin Niculescu.

O’Neill, who beat Tischenko in 2010, was left shaking his head after the decision was announced. He more than held his own in the first two rounds in particular, where his work, particularly off his jab, was much the cleaner.

“I thought that Darren shaded the first two rounds and did enough. It was a close call and Darren gave it everything,” said Irish team manager Peter O’Donnell.

“Dean showed tremendous courage and it was a top performance. Michael is a class act. He’s as comfortable at southpaw as he is at orthodox. It will take some man to beat him.”

Joe Ward and Adam Nolan will be in action on Tuesday looking to join Conlan and Walsh in the last eight.

The top six boxers (the semi-finalists and quarter-finalists that lose to the eventual finalists) in each of the 10 weight classes in Samokov qualify for Qatar.

Three Irish boxers – light flyweight Brendan Irvin, lightweight Sean McComb and middleweight Michael O’Reilly – will compete in the Qatar event through the quota system and they were included in a list of 30 released by the International Boxing Association (AIBA) on Monday.