McGregor has no hope against Mayweather so why the big deal? 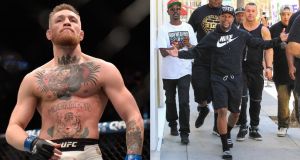 The disparity of boxing talent between Mayweather and McGregor would be so great that the masses would finally appreciate his skill. Photo: Getty Images

Some scientists and Silicon Valley smarts increasingly believe that nothing we experience is real, and that life is just a giant computer game created by a far more sophisticated super-intelligence. This theory even has a name: simulation hypothesis – although, disappointingly, it has nothing to say about whether Cristiano Ronaldo might stay on his feet more in a parallel universe.

If these folk are right, then perhaps we should also start asking whether our silicon overlords have got bored with Earth: The Game and decided to tweak the programme radically. And maybe having shown just how gullible we are when swallowing any old political nonsense, they want to do the same with sport.

How else to explain the bizarre and tinnitus-like clamour for a “superfight” between Floyd Mayweather and Conor McGregor? For months a potential meeting between the biggest names in boxing and mixed martial arts appeared to be hot air; an attempt to keep their Kilimanjaro-sized egos in the news. But, increasingly, what was gas is taking solid form.

Last week McGregor announced he had agreed a deal with his paymasters, the UFC, to allow him to fight Mayweather if a contract could be agreed. Then, late on Saturday, Mayweather admitted that the only fight that made sense to him was against the Irishman. “He kicks ass in the Octagon, and I kick ass in the boxing ring,” he said. “The fans demand that fight and you have to give the fans what they want to see.”

We all know what is in it for Mayweather: an easy night, a cheque with plenty of noughts on the end of it, and an open-goal opportunity to surpass Rocky Marciano’s 49-0 win/loss record. McGregor, meanwhile, would be getting his biggest pay-day. No wonder he can see cash signs rolling in front of his eyes like dollars on a one-armed bandit.

The question is, what is in it for us? We know how this story plays out. Do we really need to be suckered again?

Mayweather’s last seven bouts – all won on points – offer a glimpse into this future: pre-fight bombast and swaggering bravado followed by 12 rounds made up of the sound of leather hitting air. The last man he stopped was Victor Ortiz in 2011.

True, there is a slim chance that McGregor’s lack of boxing skills will encourage Mayweather to trade more, making it a more exciting fight, or that the 40-year-old American will be surprisingly vulnerable having not fought for two years. And yes, we should concede that McGregor might get lucky with a big punch. But the same has been said before most of Mayweather’s last dozen fights. It just never plays out that way.

A much more likely scenario is that by halfway anyone who has stumped up for the pay-per-view will be halfway through the six stages of grief, as Mayweather dulls his way to another victory.

Perhaps the bout’s only redeeming feature is that the disparity of boxing talent between Mayweather and McGregor would be so great that the masses would finally appreciate his skill. Then again, we don’t need to watch Usain Bolt take on club runners to know how supreme he is at sprinting.

The problem with such contests between boxing and MMA is that there is no way to ensure they are “fair” – that both men have an equal chance of winning. Mayweather will dominate under boxing rules, just as Randy Couture did under UFC rules when the former boxing world champion James Toney dared to enter the Octagon with him in 2010. The result was an embarrassing mismatch.

Such imbalances have been obvious since at least 1976, when Muhammad Ali – then heavyweight champion of the world – was persuaded to travel to Japan to “fight” the professional wrestler Antonio Inoki. Inoki was not allowed to throw, kick or grapple and stayed on the ground for all but the first 14 seconds of the first round. Ali, meanwhile, did not throw a punch until the seventh round. The result was high farce. The fight was eventually declared as a draw and the promoter Bob Arum later described the match as “the low point of my career”.

The bar is low, then, if Mayweather versus McGregor does materialise. But given the expectations and the high cost of buying the contest it would inevitably be a thudding anti-climax. No one disputes that McGregor is a hugely talented mixed martial artist, whatever you may think of his pimp persona. But asking him to fight using only his fists would deprive him of most of his weapons. It would be like asking a shark to catch his prey without using its teeth.

We all know this. And still the tune being played is luring many people in. As the UFC kingpin Dana White has put it: “People can say it’s ridiculous, it’s not a fight, it should never happen, it’s lopsided, it will be this and that. But everywhere I go, everything I do, that’s all they want to talk about.”

And talk about it they do. Throughout his career, Mayweather has always been so good defensively that he repeatedly leaves his opponents dazed without even throwing a punch. An even greater trick, however, is that he keeps luring us in to watch him do it.

1 America at Large: Hurling fan Dowling leading the fight against Covid-19
2 Cheltenham cited Boris Johnson’s Twickenham trip as a reason for Festival green light
3 Conor McDonald: ‘People in fitness industry need to be careful what they put online’
4 Pro14 nations could miss out on €15m in TV revenue if league is not completed
5 My favourite sporting moment: Roscommon minors restore pride to a county
Real news has value SUBSCRIBE