Little fuss for Maria Sharapova as she dispatches Johanna Konta

The Russian sealed a 6-2,6-2 victory with little drama 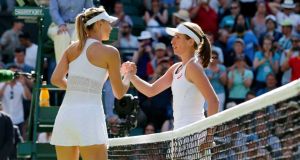 Maria Sharapova of Russia shakes the hand of Johanna Konta of Britain after winning their first round match at the Wimbledon Tennis Championships. Photo: Suzanne Plunkett/Reuters

The former Wimbledon champion, Maria Sharapova, advanced to the second round against the British No2, Johanna Konta, who was unable to translate her recent impressive grass court form into a shock on Centre Court.

“The first match of Wimbledon is never the easiest one. I had an opponent who was a crowd favourite,” said Sharapova afterwards. “I was happy I was able to stay focused throughout the match. I anticipated the ball pretty well and returned pretty good.”

Konta, who reached the quarter-finals in Nottingham and Eastbourne, was afforded a glimpse of a chance at the beginning of the second set when she broke for a 1-0 lead but then allowed Sharapova to break straight back.

Sharapova had not played in the past month, since her fourth round loss in straight sets to Lucie Safarova at the French Open. She looked a little rusty at times, serving up seven double faults, but was happy with her form on her return to the surface.

On the court where she won Wimbledon as a 17-year-old in 2004 Sharapova clinically dispatched Konta when it mattered.

Konta, born in Sydney to Hungarian parents and a British resident for the past nine years, had a hugely encouraging buildup to Wimbledon.

She beat the world No8, Ekaterina Makarova, and No20, Garbine Muguruza, en route to the quarter-finals at Eastbourne and insisted she would not be fazed at the prospect of facing a former champion on Centre Court on the opening day.

The languid Konta was not overawed, earning break points in both of Sharapova’s first two service games. But the Russian managed to slam the door shut and moved up a gear before an engaged crowd, taking the next two games to love to establish a 4-1 lead.

At the start of the second set, Konta punched a forehand return down the line and earned two break points before Sharapova double faulted to give her the lead.

But the Russian, targeting Konta’s forehand, won the next four games and went on to seal the second set in efficient fashion.

Konta, on her fourth appearance at Wimbledon, may still not have won a match at the Championships but will feel that further progress is well within her grasp.