LeBron James in no mood to justify Miami trip 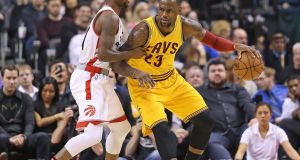 Cleveland’s LeBron James felt no need to justify his trip to Miami to work out with former team mate Dwyane Wade this week, telling reporters on Thursday he went “because I want to”.

James was criticised by fans and media pundits after flying to Miami on his day off and training with Wade, who he could come up against in the Eastern Conference playoffs.

If the seedings remain the same to the end of the regular season, the top-seeded Cavaliers (42-17) could meet the fourth-seeded Heat (35-26) in the conference semi-finals.

Despite setting the pace in the East, questions about team chemistry continue to dog the Cavs, who fired coach David Blatt in January and replaced him with Tyronn Lue.

Four-times league MVP James played with the Heat for four seasons and was in no mood to explain the trip.

“I would love to go to LA, but (Miami is closer). It makes more sense for me to go South than go West,” he told reporters. “But I go because I want to.”

Speculation that all is not right in the Cavs’ dressing room grew earlier this week when James said on Twitter: “It’s OK to know you’ve made a mistake. Cause we all do it at times.

“Just be ready to live with whatever comes with it and be with ... those who will protect you at all cost.”

1 On healing and wild hurling: The re-education of Diarmuid Lyng
2 Few, if any, have given as much to Munster as Garrett Fitzgerald
3 ‘Your father works for my father’: Schools rugby turning toxic in the stands
4 Triple bogey costs Rory McIlroy as Adam Scott prevails at Riviera
5 Wexford best the weather and Kilkenny on a mad day to be hurling
Real news has value SUBSCRIBE