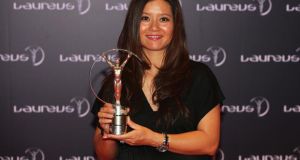 Retired tennis player Li Na was one of the most popular winners in Shanghai, picking up the exceptional achievement award. Photograph: Feng Li/Getty Images for Laureus 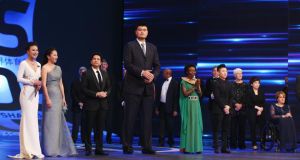 Security was tight around the landmark Grand Theatre building on the north side of People’s Square in downtown Shanghai, as some of the biggest names in world sport arrived for the Laureus Sports Awards.

There was an Oscar night feel to the event, an impression helped by the presence of Hollywood A-list celebrities such as Bill Murray, Benedict Cumberbatch and Henry Cavill, while supermodel Karolina Kurková rubbed shoulders with former Manchester United and France striker Eric Cantona and All-Black legend Sean Fitzpatrick.

Cantona had earlier surprised everyone by his choice of player he rates as the best in the world – Paris Saint-Germain’s Argentinian forward, Javier Pastore.

Bill Murray, a well-known supporter of the Chicago Bears, Bulls and the hapless Cubs, insisted that his skills at watching sports should qualify him for a prize.

Wearing a black Chinese-style suit, a purple fedora, what looked like a pair of golf shoes and brandishing a camera “selfie-stick” like a nine iron, Murray said he played a quiet, but key, role in training some of the stars attending the gala event in Shanghai.

“I am more than a sports fan, I’m a major sports figure. Probably half these athletes wouldn’t be here were it not for my coaching,” he said, before showing a series of slides where he could be seen telling David Beckham to “bend it”, and reminded Formula One driver Lewis Hamilton, who last weekend won the Shanghai Grand Prix, that he didn’t need to flash his headlights when he overtook his rivals.

As the Olympics in 2008 in Beijing showed, China likes to stage major sporting events and it is bidding for Beijing to host the 2022 Winter Olympics.

Towering over everyone was Yao Ming. While the missionaries brought basketball to China in the late 19th century, the game really took off in China when the 7ft 6in centre joined the Houston Rockets in 2002.

Yao was awarded the Spirit of Sport award.

“When it comes to the spirit of sports, we can think of so many ways to describe: never to give up, tough, be strong facing rivals, make it to the end.

“But sometimes we forget that this spirit may not only stay in the field, we should also hold on to them in our life. I believe every athlete, whatever sports they play, will live their life with the spirit of sports,” he said.

The most popular award on the night went to a heavily pregnant Li Na, the tennis star who took the exceptional achievement gong and who arrived at the venue in the Mercedes F015 concept car.

The two-time grand slam champion retired from tennis in 2014 due to chronic knee problems.

“No matter what, I think the Laureus awards represent the highest honour in the world of sports, and that’s why it’s every athlete’s dream to win this award,” she said.

“I was not aware of the exceptional achievement [award] before, so all of my attention was put on Sportswoman of the Year, wondering if I had a chance to beat Serena [Williams] this time.”

Earlier this month, Liu announced his retirement on his Sina Weibo microblog.

“I have to leave you right now, although I hate to give up. I am really ‘old’ and ‘sick’. I want to start a new journey. I will end my professional sports career and formally retire from today. This is an informed decision . . . I have no other choice.”

Both Li and Liu excelled in sports that are not traditionally considered areas where China excels, individual sports rather than team sports, as China’s sporting prowess is most often displayed in areas such as gymnastics.

Germany’s World Cup-winning international squad won the team of the year prize and watching the clips of Germany’s success in Brazil last year can be a painful reminder of the plight of football in China.

Despite having the world’s biggest population and being crazy about football, China failed to qualify for the World Cup in 2014, despite the best efforts of Spanish coach José Antonio Camacho.

The Chinese team has qualified only once, in 2002, and it failed to score a single goal in three games. In 2011, its qualifying hopes perished with defeat to Iraq.

Combined with the poor performance of the national team, corruption is a problem in the domestic leagues, with so-called “black whistles” leading to widespread disillusion with the sport.

President Xi Jinping, during his visit to Croke Park a couple of years ago, spoke ruefully of his disappointment at the state of Chinese football, but there are signs the football fan has made it his personal mission to improve Chinese soccer.

In 2012, there was a major investigation into corruption and several key figures were jailed, including the former head of the Chinese FA.

He has enlisted the country’s richest man, Wang Jianlin, head of the real estate conglomerate Wanda, to help.

Wang is a major football fan, buying Dalian Shide in 1994 and turning it into a major presence, winning four titles until the company backed out over corruption in 2000.

Wang has said that he will retire in six years and devote himself exclusively transforming the national team into an international success.

In January, Wanda bought a 20 per cent stake in Atlético Madrid for €48.5 million.

Buying Atlético Madrid is a commercial decision, and the Spanish club is putting up 200 retail stores across China, selling merchandise in Wanda’s shopping malls in 100 cities. But a big part of the deal is about developing football in China.

The Spanish team is in collaboration with Chinese Super League club Shanghai Shenhua as part of “Project Wanda”.

Under the agreement, Atlético Madrid would train young players from the country to help develop their skills and eventually improve the general level of football in China.

Then in February, Wanda bought the Swiss company Infront Sports & Media, which will further boost China’s international presence in the sports marketing field.

It is run by Philippe Blatter, nephew of Fifa president Sepp Blatter.

“This acquisition of Infront will significantly increase the future impact of the Wanda Group in the culture and entertainment industry and will also drive the development of Chinese sports industry and its interest around the globe,” Wang said.

Wang said that Infront was well positioned to help support China in bidding for major sports events. The purchase comes as China is bidding to host the 2022 Winter Olympics.

Infront is a partner to numerous national federations, including the German and Italian football federation and clubs such as AC Milan, Inter Milan and Werder Bremen.

At Fangcaodi school near my home in Beijing, there are new goals and facilities that have been spruced up, with new course offerings. And attendances are rising at Super League matches across the country too.

So even if China’s big names are retiring, there may be some names coming through in the future.

1 Keith Duggan: Through the glories and the disgraces, we were all Maradona addicts
2 GAA Statistics: Can Cavan and Thomas Galligan beat Dublin with the long kickout?
3 Rugby Stats: Blame game at lineout time is on the whole team
4 Handful of God: Five magic Maradona moments
5 Diego Maradona dies of heart attack, aged 60
Real news has value SUBSCRIBE