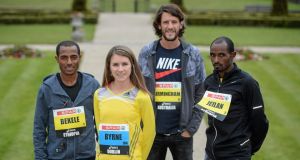 Slow weeks are the curse of all sportswriters, and stuck for an idea yesterday morning, I wandered along for a chat with the greatest distance runner of all time.

Actually it’s not that often Kenenisa Bekele is in town, especially with his fellow Ethiopian Ibrahim Jeilan, who believe me is a man of equally fearsome leanness.

“Make sure you ask them about thyroid medication,” my accountant told me, who some people will know likes to stay at the cutting edge of this sport.

First, I wanted to ask them about Mo Farah. Bekele needs no introduction, and even if Farah stripped him of both his Olympic 5,000 metres and 10,000m titles in London, at age 30 is far from finished; Jeilan, aged only 23 (if you believe him) may need to be introduced as the last man to beat Farah in a major race, out-kicking him in that amazing finish to the World Championship 10,000m in Daegu, in 2011.

Both men were fresh off the plane from Addis Ababa, in town for tomorrow’s Great Ireland Run, in the Phoenix Park, and walked into the St Helen’s Hotel in Stillorgan with the look of two killer assassins, which is what they are, when it comes to 10,000m running on the track. There’s also a strangeness about their physique that’s hard to describe, an almost adolescence build onto an older body. It’s what happens when you’ve been running great distances for as long as you can walk.

Both men also have a reasonable command of English (and far superior to my Amharic), although Bekele sounds a little overly diplomatic when asked what it felt like to lose his Olympic title to Farah. Injured for most of the previous two seasons, crippled by a torn calf muscle, I suggest Bekele simply ran out of time?

Okay indeed, although Bekele still came pretty close – finishing fourth, just two seconds behind Farah. There may even have been some consolation in that his younger brother, Tariku Bekele, at least won the bronze.

“Well, it’s never easy to win medals. Maybe another two or three weeks training would have made the difference for me, to win a medal. I don’t know.”

Jeilan knows what it takes to beat Farah, having gunned him down in the home stretch in Daegu, then missed out on London completely, thanks to a torn Achilles tendon. “Look, it is not easy to beat Mo Farah. Because he is very fast for the final two laps. In every race. Very fast.”

With that Jeilan turns to Bekele, slapping him on the back: “Now, this guy here, is fast. Faster that Mo Farah. But, over one lap. Mo Farah is faster over two laps.”

Both men clearly intend on being in Moscow later this summer for the latest World Championship instalment: Jeilan has already qualified, as defending champion, and Bekele plans on being there too. Indeed any plans to move up to the marathon remain on hold, at least for this year, and if everything goes to plan Bekele intends on regaining that Olympic title in Rio in 2016.

“Why not? If my health is good. Rio, it’s only three years now, a very short time. The marathon will depend on this season, first. Not this year, but maybe next year.”


Major winner
For a man with 27 major championship gold medals (enough to melt down into a life-sized statue of himself) Bekele certainly knows what it takes to win: yet Farah’s success in recent years raises the classic nature versus nurture argument, whether being born in Somalia explains his distance runner prowess more than the grooming of it in Britain.

“Well I think not,” says Bekele, with a more serious look. “Anybody can be successful with hard work, hard training, talent. European, African, whoever, can make it to the top. Maybe we have the altitude, but now anyone can train at altitude, and use that to improve performance.”

Legally, of course – a nice lead to that question about thyroid medication: because last Wednesday, the Wall Street Journal ran a full back page article, under the headline, “US Track’s Unconventional Physician”, detailing the work of Dr Jeffrey Brown and how he has diagnosed several Olympic medallists with hypothyroidism, or an underactive production of the thyroid hormone, which he then treats with a synthetic version, levothyroxine.

Now, levothyroxine is not banned, and there’s no firm evidence it’s even performance enhancing, yet Dr Brown has a growing list of clients, and is a paid medical consultant to Nike and Alberto Salazar, coach to Farah, plus the top American Galen Rupp, who won 10,000m silver in London.

I’m looking at Bekele, wondering how to best phrase the question, whether or not he thinks levothyroxine should be banned, and knowing full well that even with the nerve to ask it the true answer would be lost in translation.