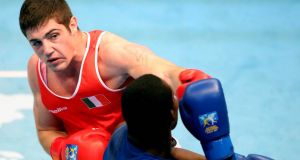 Joe Ward got off to the perfect start at the European Amateur Boxing Championships.

Joe Ward is through to the last 16 of the European Elite Championships in Samokov, Bulgaria, but Dean Gardiner is out of the tournament.

The Irish southpaw, looking sharp and focused in his first three-rounder since signing for APB last year, will now meet Georgia’s Nikoloz Selchniashvili, an opponent he has beaten in the past, for a place in the last-eight on Tuesday.

Gardiner lost to Croatian number one seed Filip Hrgovic in the super-heavy class. Hrgovic, who has qualified for Rio 2016 through the World Series of Boxing, earning a 30-25,30-25,30-25 unanimous decision.

“A very good performance from Joe today. He’ll be glad to get that one over him, the final verdict speaks for itself, said Irish team manager Peter O’Donnell.

“Michael, Darren and Dean are on tomorrow and hopefully we can get the three into the last-eight. We’ll be flying then.”

Sipal received a public warning for the illegal use of his head in the second round, a frame in which Nolan used his jab, and one snappy uppercut, to much greater effect.

Sipal poured forward in the third, but the Bray BC man, who found the target with the cleaner shots throughout, held his composure to secure a hat-trick of wins for on the day.