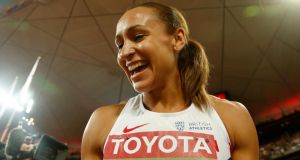 Jessica Ennis-Hill won the gold medal in the World Championships heptathlon in Beijing 13 months after the birth of her son. Photograph: Getty

Jessica Ennis-Hill has completed her golden comeback at the World Championships, winning her first major championship since London 2012 just 13 months after the birth of her son.

It was still unclear just four weeks ago whether the Olympic heptathlon champion would compete in Beijing, having only returned to action in May following the arrival of Reggie last summer.

However, a promising performance at the Anniversary Games saw Ennis-Hill put herself forward for selection — a decision she justified in some style at the Bird’s Nest.

The 29-year-old edged a fascinating battle with compatriot Katarina Johnson-Thompson on Saturday to take the overnight lead, which she pushed on from with solid displays in the long jump and javelin.

It put Ennis-Hill on the cusp of gold — an opportunity she did not let slip, winning her 800 metres heat in 2 minutes 10.13 seconds to add another world crown to the one she won in Berlin six years ago.

It saw her end the event on 6,669 points — 115 ahead of Canada’s Brianne Theisen-Eaton, with Laura Ikauniece-Admidina of Latvia taking the bronze.

Had it not been for an agonising start to the day, Johnson-Thompson would have likely replaced one of the latter duo on the podium.

There even appeared a chance that she could topple Ennis-Hill, only to fail to score any points in the long jump — an event she will compete in at the Bird’s Nest later this week.

Johnson-Thompson will approach that understandably downbeat, having failed to record a distance on Sunday morning with the third red flag particularly exasperating.

It would have been the event’s biggest distance was it not chalked off, with officials deeming the 22-year-old to have left the slightest imprint on the plasticine.

After several minutes of discussions, and despite her remonstrations, it was ruled an illegal effort — a decision British Athletics appealed, only to later withdraw it after accepting it was a foul.

It left Johnson-Thompson visibly shell-shocked yet she continued in the javelin and 800m — although she had no choice under IAAF guidelines, with British Athletics confirming there would have be a medical reason to withdraw and medical confirmation she could compete again in the long jump.

That harsh rule was brought into sharp focus at the end of a galling day as the Liverpool athlete ambled home last in her 800m heat, with her time of in 2 mins 50.73 secs — 43.09s outside her personal best.

“Right before my first throw, I saw (British Athletes performance director) Neil Black come down to my coach,” an emotional Johnson-Thompson told the BBC about the appeal.

“I had to know. I couldn’t compete without knowing. I just went over and said ‘what’s the deal?’ I was a bit deflated at that point to say the least.

“This is the last place I wanted to be right now.

“I had to compete the 800m if I wanted to go to the long jump. That’s not my fitness (behind that slow time). I want to save my legs.”