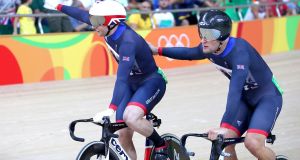 The 28-year-old was under pressure to prove he is still top dog on the team, let alone the world, but his greater experience showed as he dominated both heats with something to spare, retaining the title he won in London.

Kenny, who was a team mate of Skinner’s when Britain won the team sprint earlier in the week, has now won as many gold medals as fellow cyclist Bradley Wiggins.

Wiggins took his fifth gold and eighth Olympic medal by winning the team pursuit on Friday, and Kenny could match him when he contests the keirin here.

Kenny and Skinner have been sharing a room in the Olympic Village, but when it came to the start, there was no room for sentiment as Kenny put his younger rival firmly in his place.

“Jason had so much in the tank, he had phenomenal power.”

Britain have dominated the track cycling programme so far in Rio, winning four of the six events completed so far.