James McGee through to third round 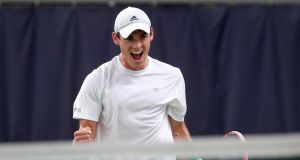 Ireland’s James McGee is just one match away from gaining entry to his first ever Grand Slam event in Paris. The 27-year-old Irish number one beat the 119 ranked Guido Pella in two sets, 6-4, 6-1 at Roland Garros to set up a third round match that could see him in the men’s main single’s draw.

McGee has never before played in any of the four Grand Slam events, while no Irish player has competed in the main draw of the most famous clay court tournament in the world since Sean Sorensen in 1982.

McGee struggled to close the first set despite flying to a 4-1 lead over the Argentinean, breaking his serve in the fourth game for 3-1 and holding serve for 4-1. While it looked straight forward from there Pella dug in and from 5-3 up, McGee’s serve was broken for 5-4 before an almighty struggle in the final game, which the Irish number one finally closed for 6-4.

The second set was again kind to McGee in the early stages and again he took an early lead, breaking Pella’s serve for 2-0, then holding for 3-0 and again attacking his opponent on his serve for 4-0.

McGee ranked almost 100 places below Pella at 209 in the rankings continued his race to victory, taking less than half an hour to dispatch his opponent 6-1 in the second set.