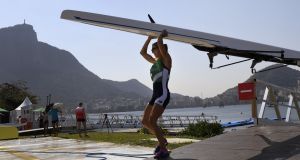 Ireland’s rower Sinead Lynch helps carry her boat from the water after a training session at Lagoa Stadium ahead of the 2016 Rio Olympic Games. Photo: Getty Images

And off we go. Three Ireland crews compete in heats at the Olympic Games in the next two days. The two lightweight doubles will hope to finish in the top two on Sunday and go directly through to the semi-finals, while Sanita Puspure should ease into a quarter finals of the single sculls by finishing in the top three in her heat on Saturday.

Puspure has come in under the radar, but if her mental state is right she has the ability to make the final come next Saturday in an event where Kim Brennan of Australia is the only nailed down medal certainty. Sean Drea, the great Irish single sculler, thinks highly of Puspure and feels not enough has been made of her fine second place in the Olympic qualifier, where she left Olympic medallists Ekaterina Karsten and Fie Udby Erichsen in her wake. Puspure showed maturity in missing the final World Cup as she had a cold and also wanted to prioritise training. She has been seeded seventh.

Paul and Gary O’Donovan are seeded fifth. The Irish were the story of the early months of this season. Silver at the first World Cup; gold at the European Championships. The improvement since their qualifying mark of 11th last year was remarkable. In the final two World Cups, however, they finished fourth. France and South Africa may be beyond them; Norway is in play (Ireland beat them in the first World Cup; were just pipped in the heat in the final one). Ireland should place from fifth to third.

The thrilling sprint finish in the final quarter is the O’Donovans trademark; for Claire Lambe and Sinéad Lynch that phase has been a problem. Their qualification from the B Final of the World Championships last year was an act of bravery as they gutted it out to take third: they were dropped into that race when they were caught out by Canada’s sprint in the semi-final. This season, once they got over an injury to Lambe, they have put vim in their middle thousand metres, so that they are so well-placed that they are not caught out by the whirlwind of fast finishers. Their seeding of seventh is on the upside: Wednesday’s semi-final could be a crucial test.

The Irish rowing footprint in Rio is big: Coleraine’s Peter and Richard Chambers and Alan Campbell will represent Britain. Their hometown club, Bann, is on a high as Fiona Chestnutt and Hannah Scott were part of the Ireland quadruple which took bronze at the Coupe de la Jeunesse on Sunday, joining the Amy Mason and Tara Hanlon from Cork, who took silver in the pair.

One of Britain’s top medal hopes in Rio has strong Irish roots. Madeliene Dillon, who was brought up in Termonfeckin in County Louth is the mother of Constantine Louloudis, the strokeman of the all-conquering Britain four. “The first time he was in a boat was in Ballyconneely,” she told The Irish Times.

Madeliene Dillon was educated at Loreto, Balbriggan. She is a lady in waiting to Princess Anne. She is a cousin of Dan Carter’s wife, Honor Dillon.

While Louloudis is off to holiday in Connemara after the Games, Paul O’Donovan will travel directly to the World Championships in Rotterdam, to compete in the the senior lightweight single sculls.