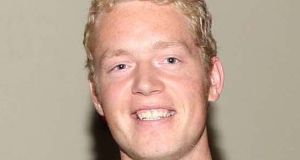 Irish rower, Paul Giblin, who has died at the age of 34.

The rowing community in Ireland is mourning the loss of Paul Giblin, a key man in the remarkable NUIG/Gráinne Mhaol crews which were the dominant force in domestic rowing in the first decade of this century.

Giblin, who was just 34, had lived with great dignity with cancer in recent years. He was diagnosed with refractory Hodgkin’s Lymphona in April 2012, and had a bone marrow transplant in 2015. He had undergone a number of regimes of chemotherapy.

Even while dealing with his illness he gave himself to the sport. He was a joint coach of the NUIG intermediate eight which won a Championship title in 2013.

He was a civil engineer, and was commissioned as an officer in the Army in 2012.

He married Cate Crowe in Galway in 2014.

“He was the bravest and most noble soldier I ever knew,” said Ruadhan Cooke, the long-time cox of NUIG/Gráinne Mhaol crews.

The sadness at the passing of Giblin is all the more acute as the coach of the dominant NUIG/Gráinne Mhaol crews, Tom Tuohy, died at just 56, in 2011.

After two days of repose at his home, the funeral mass for Paul Giblin will be held on Wednesday at St Oliver Plunkett Church in Renmore.