Irish have wind in their sails as international victory beckons 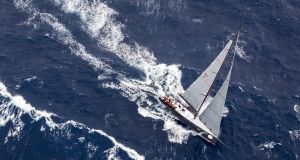 Ichi Ban with Howth Yacht Club’s Gordon Maguire on board was second in IRC class zero in this week’s Sydney-Hobart race. Photograph: Rolex

A second in class is already in the bag from the 41st Sydney-Hobart race and there is the prospect of a new year World Youth Sailing medal for Ireland by Sunday.

Strong breezes in Langkawi have swept a three-boat Irish team to the top 25 per cent of their respective dinghy fleets to the extent that Ireland is in the hunt for its first double-handed podium finish in 19 years and its third World Youth medal since 2012.

An easterly wind over the first two days offered up to 22 knots for the 425 sailors from a record 76 nations racing in five classes across nine fleets. Except for the scorching Malaysian heat, the three-boat Irish team felt very much at home in the strong winds.

There was no surprise in the Irish camp when on-form national 420 champions Douglas Elmes (17) and Colin O’Sullivan (16) from HYC moved into third overall on Wednesday after four races. They leapfrogged last year’s Singaporean gold medallist Singapore’s Jia Yi Loh, now sailing with Matthew Lau, in fourth to include a well-earned win in race three.

The Leaving Certificate students left for Malaysia on a high note this month when they won an end-of-season UK regatta to put them in top gear ahead of their Youth Worlds debut. It’s not the only season success either: Elmes from Kilkenny and O’Sullivan from Malahide, now sailing together for 15 months, made a clean sweep of the Irish calendar, taking all four regional championships.

The duo fell back one place overall yesterday as the breeze dropped away but are still in the medal hunt when racing resumes tomorrow.

There were top five results all round for the Irish yesterday. Lough Derg’s Aisling Keller took a third moving her up to 11th in the girls radial, Ballyholme’s Liam Glynn had a fourth and is in 14th in the boys radial, and Elmes and O’Sullivan had two fifths dropping them from third to fourth overall.

Lighter winds are forecast for tomorrow and Sunday so it’s going to be an interesting finish to see if the Howth duo can replicate or better club mates Laura Dillon and Ciara Peelo’s double-handed bronze from 1996.

In the closing stages yesterday, all eyes were on Quikpoint Azzurro, the smallest in the fleet, and for most of Wednesday afternoon Shane Kearn’s Sparkman & Stephens 34 raced towards the finish on pace to potentially claim the overall win on handicap but in the end Paul Clitheroe’s TP52 Balance took overall honours.

Meanwhile, Greystones Sailing Club in Co Wicklow has signed a lease on its new harbour clubhouse and will move there by summer 2016. The premises is one of a number of new clubhouses at the harbour. Leases for the new clubhouses of the Angling, Rowing, Diving Clubs and Sea Scouts are expected to be signed in January.

The previous premises of the Sailing and Angling Clubs have been “compulsory purchased” as part of the Harbour Redevelopment Plan and the new ones have double the previous boat parking and clubhouse space.