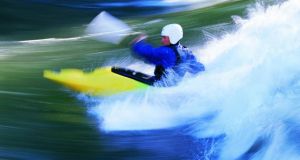 In a busy month for canoeing, Ireland’s paddlers will be hoping for some good results at the Canoe Marathon World Championships in Copenhagen in Denmark this weekend. Senior athletes Jenny and Peter Egan head up a team featuring, juniors, under-23 competitors and a strong Masters contingent, in which Déaglán Ó Drisceoil will be targeting a medal.

The results at last weekend’s canoe slalom World Championships in Prague were, at best, mixed. Ireland’s best placing was 19th for Ciarán Heurteau in the men’s K1. However Eoin Rheinisch finished a disappointing 32nd, with a nightmare run in his semi-final, where he had six touches. He was not funded for warm-weather winter training and struggled with form and illness this season. The man who finished fourth in Beijing 2008 and 14th in London 2012 said yesterday that if the support was not available he was “not interested” in competing next season.

Hannah Craig, who was 10th at the London Olympics, finished 42nd in the women’s K1.

The first year of the Olympic cycle can be a poor predictor of results three years later - and fans of canoeing in Ireland will hope so. Two weeks ago, in the World Canoe Sprint Championships in Duisburg, Andrzej Jezierski, who gave Ireland a ninth-place finish at London 2012, finished 15th overall in the C1 200 metres.

Back on the home front, the Liffey Descent continues to draw impressive support. Karl Dunne, the race director for the event on September 28th, said yesterday that 400 competitors had already entered. “We are on schedule for seven to eight hundred participants,” he added. Entries close on the 25th, but there is a late entry fee if names are not in by tomorrow.

The big hope for slalom canoeing in Ireland is for an international course of its own. In the interim, planning permission has just been granted for the development of a permanent course at the sluice in Lucan. Work on the 12 steel columns for the project must be carried out during the sumer months because of salmon spawning times, so the middle of next year is the likely construction window.

One of the key people behind the plan, Ike Jacob, said that the course could have 15 to 20 gates and will suit training and competiton, though he does not see it as a venue for senior international competition. Jacob, who was the Ireland team manager for canoe slalom from 1979 to 2000, said a proposal for a purpose-built course in Ireland had been tabled after London 2012. A course could be self-finacing, as courses are internationally, through sports such as rafting.

“It’s achievable and it’s absolutely necessary if we are to gain any traction at all,” Jacob said. Athletes such as Mike Corcoran - who came close to a medal in Barcelona - and Ian Wiley punched way about their weight, given that they had no home course. “Eoin’s fourth place in Beijing was way above the odds. We are capable of doing that kind of thing without having homegrown facilities - think of what we might be able to do if we had (them).”

Jacob believes that the Olympic disciplines, slalom and sprint, should have a single High Performance Director, with national coaches for each discipline.

However, the new president of Canoeing Ireland, Mark Clinton, said yesterday that a HPD had been a demand for years, but doubted that even the acquisition of a full-time coach was likely in the near future. “We don’t have enough depth in slalom to justify a full-time coach,” he said. “Whilst we would love to have a full-time coach we would find it difficult to get funding from the Sports Council. ”

He said that as the junior pipeline improved it would be easier to have a squad coach.