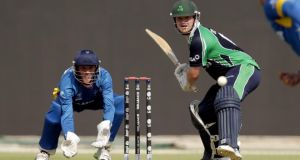 Ireland qualified for their fourth straight World Twenty20 finals at the first time of asking, and in stunning fashion, yesterday as they hammered Hong Kong by 85 runs in Abu Dhabi.

In what came down to a straight shoot-out to top Group A of the qualifier at the Sheikh Zayed Stadium, Phil Simmons’s side showed the gulf in class between the sides to join Afghanistan as the first two qualifiers for next march’s tournament in Bangladesh. Ireland will earn $250,000 for qualifying.

They will be joined their by the Ireland women’s team, who qualified for their first T20 finals last summer at a qualifier in Dublin.

A repeat of last year’s decider between Ireland and Afghanistan is still on the cards as they are kept apart in next Friday’s semi-finals, with Ireland taking on the winners of the play-off game between hosts the United Arab Emirates and the Netherlands, who finished as runners-up to the Afghans in Group B.

Winning the toss
Despite missing the services of Ed Joyce, who remained in England for the birth of his second child, Ireland’s batsmen have impressed all the way through the qualifiers and it was no different yesterday as they made 207 for four after winning the toss and batting.

It was their second time to go past 200 following last Wednesday’s record score of 216 for three against the United States.

Paul Stirling hit 77 from 46 balls, sharing in a 91-run opening stand with skipper William Porterfield (38 off 30). Kevin O’Brien kept up the momentum in the second half of the innings with an incredible display of hitting as he finished unbeaten on 62 from just 27 balls, with three fours and five sixes.

Hong Kong got off to a blistering start in their attempt to haul down the huge target and were 69 for one after the six powerplay overs. The spinners again made the difference, with Stirling completing an incredible match by taking four wickets for just 10 runs from his four overs.

Finished off match
Left-armer George Dockrell took two for 18 from his allocation, while off-spinner James Shannon finished off the match with his first delivery as Hong Kong were bowled out for 122 in the 18th over.

Stirling is looking forward to yet another big tournament in Ireland colours in Bangladesh, a venue he has played in both international competition and in the Bangladesh Premier League.

Ireland will go into an eight-team first round with the six qualifiers from this event being joined by the hosts Bangladesh and Zimbabwe, the teams ranked seventh and eighth the ICC T20 rankings. Two teams will go on to the super eights stage of the competition. “Yeah it’s good, I think most of the times I’ve been involved we’ve qualified, so it’s another one today, another tick in the box, and hopefully we can go and progress into the latter stages of the World Cup,” said Stirling.