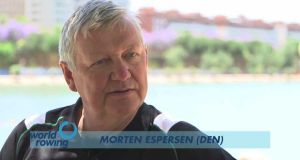 Irish rowing successes have made a splash outside the country. The new coaching roles advertised by Rowing Ireland have drawn applicants from far and wide – from North America, through Europe to Australia.

Of the 12 who applied as of Thursday, four were from Ireland and eight from abroad. Eleven are male.

Morten Espersen, the Ireland high-performance director, said that by closing date on Sunday there might be about 20 applicants. He did not expect the extent of the interest.

“A lot of people have said to me ‘something is happening’ [in Irish rowing]. Word is going around.”

Espersen is one of the speakers at the Rowing Ireland Coaches Conference in Dublin on Saturday. John Treacy, the chief executive of Sport Ireland, will also attend.

The extraordinary general meeting of Rowing Ireland will be held in conjunction with the event.

A new four-man coaching team for juniors has been chosen. It will be led by Ray Morrison and includes Fran Keane, John Walsh and Dan Buckley. Outgoing junior lead coach, Pat McInerney, will continue in his role as coach development officer.

The Irish Open last weekend at the National Rowing Centre had just the sort of buzz the organizers hoped for. The weather was often spectacularly good and the medal presentations in the centre gave athletes the sort of lift which should help sustain them through heavy winter training.

Olympians Paul and Gary O’Donovan – who have been nominated as Fisa World Male Crew of the Year – and Sanita Puspure shared the limelight with some of the most promising rising stars.

UCD’s David O’Malley, Shane Mulvaney and Eimear Lambe impressed as did the the fast double of Puspure and Emily Hegarty, who is just 18.

Espersen announced that should the world governing body, Fisa, drop the lightweight four from the Olympic programme then: “If lightweights are strong enough they will be pushed into the heavyweight programme.”

He also made a commitment to develop heavyweight men’s rowing. If a crew is fast enough “they will go to the United States for the World Championships”.

In a big entry, Portora and Bann were notable absentees, as was Monika Dukarska, who will compete for Killorglin in the World Coastal Rowing Championships in Monaco next weekend.

Georgia O’Brien of Kenmare showed admirable composure after a capsize – she even pushed her boat out of the lane to let the next race pass. However, the safety launch was some distance away and took time to get to her.