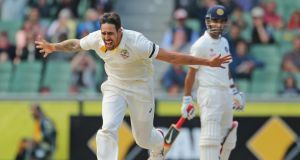 Virat Kohli and Ajinkya Rahane helped spare India’s blushes in Melbourne as the third Test against Australia ended in a draw, although it was not enough to save the series for the visitors.

Chasing a victory target of 384 on day five to keep alive their chances of tying the four-match series, India were on the ropes when they were reduced to 19 for three after just eight overs.

But a fourth-wicket stand of 85 between Kohli and Rahane set the tourists back on track and they ploughed on to reach 174 for six before captains Mahendra Singh Dhoni and Steve Smith shook hands — with Dhoni then going on to retire from Test cricket all together.

The result means Australia win the series, holding an unbeatable 2-0 lead heading into the final Test in Sydney next week.

The home side resumed on 261 for seven in their second innings, a lead of 326, but their hopes of pushing on were not helped by early rain delays.

Once the skies brightened, overnight pairing Shaun Marsh and Ryan Harris (21) took their eighth-wicket stand on to 69 before the latter edged Mohammed Shami to Dhoni behind the wicket.

That left Marsh carrying Australia’s hopes and he moved his overnight score of 62 on towards a likely third Test century only to be run out on 99, with Kohli taking out the stumps with a direct hit despite the batsman’s best attempts to dive for the line.

Marsh’s demise prompted the declaration from Smith on 318 for nine, but India’s run chase got off to a shaky start with the top three all removed cheaply.

Shikhar Dhawan was trapped leg before by Harris without scoring, Lokesh Rahul followed six balls later to Mitchell Johnson and Murali Vijay was also removed lbw, this time by Josh Hazlewood, as the visitors crumbled to 19 for three after just 8.1 overs.

However, a fired-up Kohli joined forces with Rahane to get the runs flowing. Kohli moved past his half-century, off 87 balls, with a flurry of boundaries while Rahane was a calmer presence at the other end as India staged a recovery.

Harris eventually broke the partnership, removing Kohli for 54 with Joe Burns taking the catch at backward square leg, while his replacement Cheteshwar Pujara added a patient 21 before he was bowled by Johnson.

Rahane was the next to fall just short of his own fifty, Hazlewood claiming his second scalp to dismiss the right-hander for 48, to leave India on 142 for six in the final session and still battling to save face.

Yet with deliveries running out for Australia, and Dhoni (24no) and Ravichandran Ashwin (8no) standing firm at the crease, a draw was eventually settled on with four overs remaining, with Dhoni holding his bat through to the end of his career.