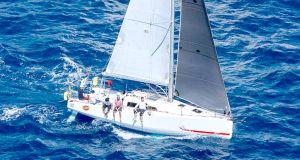 Up to 63 yachts are nearing the conclusion of the 600-mile non-stop race around 11 islands in the West Indies that began last Monday.

Some of the fastest boats are already finished and the time set by the clubhouse leader Proteus, a Maxi 72 skippered by George Sakellaris, will be hard to better but class honour remains very much in the balance in several IRC classes.

Although the Sunfast 36 Bam, skippered by Conor Fogerty of Howth Yacht Club, may have slipped to 17th in the IRC overall rankings, the Dublin crew is level on the water with German Swan 44 Best Buddies, skippered by Susann Wrede. Yesterday, Fogerty was first in IRC 3 and second in CSA 2 with 70 miles left to sail.

The Irish association, who were awarded €323,000 in Government funding last week, has launched a new “sailing passport” which, it says, heralds a new era for sail training.

Having to collect certificates was identified by the association’s strategic review as one reason for the high attrition rates in youth sailing. Two years on, it has unveiled its solution – an online “passport” that finally rewards skill development outside traditional summer sailing courses. By 2017 the association will do away with the paper log book completely.

The association has also simplified its small boat sailing scheme, and changes to instructor endorsements to differentiate between training for specific skills and general coaching.

Given this weekend’s favourable forecast, a Dún Laoghaire handicap fleet of 46 cruisers aim to complete the second race of a six race series this Sunday after a fortnight of cancellations due to strong winds for the Spring Chicken event.

There are high hopes for Greystones Sailing Club’s Shane MacCarthy who heads to Barbados as part of a 22-boat Irish team for the GP14 World Championships in late March.

The 70th anniversary of the IDRA 14 dinghy will be marked on Dublin Bay this June with the first new build in 35 years. Fourteen Number 166 will be named at Clontarf Yacht and Boat Club after over a year in build by Ronan Melling and his team.