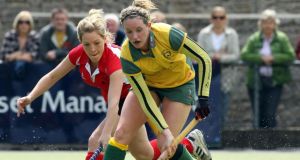 Kate Dillon: got the only goal in Railway Union’s win over Hermes. Photograph: Dan Sheridan/Inpho

Only Ulster Elks had a comfortable passage in the second round of the Irish Senior Cup on Saturday. They beat Lisnagarvey 4-1 as six sides won by just a single goal margin while Ballymoney needed penalty strokes see off Glenanne.

Glenanne, a week after they eliminated Pegasus on strokes, bowed out having come back from a goal down to lead the Ulster side through Niamh Cashman and Clare Shillington scores. Jess Moore, though, forced the game in to extra time and Glenanne suffered the misery of a shoot-out defeat this time .

Ballymoney face a home tie against Railway Union in the last eight, the cup holders avenging their league defeat to Hermes a week ago thanks to a lone Kate Dillon goal.

UCD and Old Alexandra will meet in one of two all-Leinster quarter-finals. Brenda Flannery’s late goal gave UCD a 2-1 win over Ards, Rachel Gray got Alexandra’s winner against Cork Harlequins.

Pembroke Wanderers and Loreto, paired in the next round, also had the narrowest of victories, Pembroke edging past Greenfields with a Hayley O’Donnell goal while Nikki Keegan and Ciara Vincent got the scores that gave Loreto a 2-1 win over Queens.

A hat-trick by Zoe Hawthorne, meanwhile, saw Lurgan beat Armagh 3-2–- they meet Elks in the only all-Ulster quarter-final tie.