George Dockrell: ‘Hitting the winning runs against UAE was a great moment’ 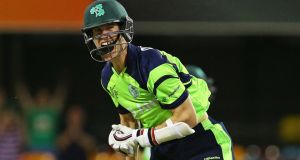 Ireland’s George Dockrell celebrates after scoring the winning runs against the UAE during the Cricket World Cup Pool B match at the Gabba in Brisbane. Photo: Indranil Mukherjee/AFP/Getty

If you asked my Somerset or Leinster team-mates, they’d tell you I’ve always fancied myself as a batsman, but walking out at The Gabba last night with Ireland still needing 12 runs from 15 balls was a different story altogether from heading out to the middle in Taunton or Rathmines.

There were nerves, plenty of them, but they were of the right variety. I’d had a chat with Ed Joyce and batting coach Matthew Mott about how to play it, so I was pretty clear in my mind what I was going to do.

There may have only been 5,500 in a 44,000-capacity stadium but the atmosphere at the ground was electric and the Irish support was phenomenal.

It gave me confidence and I’d even said to Alex Cusack at the break that it would be us finishing the game, so it was fitting the we put on the winning 12 runs together. Special too for both of us as my family were among the crowd, along with bus loads of Cusacks, with Alex having been born in Brisbane.

I haven’t hit the winning runs for Ireland before so that moment was special to me and one I’ll cherish for the rest of my life. There’s no better feeling than winning a game for your country and it sets us up nicely with two wins from two games going to Canberra and a clash with South Africa next Tuesday.

To the UAE’s credit, they came out strong and put on a good show with the bat. We restricted them well in the middle but again struggled bowling in the last 10 overs. We know this is a weakness for us and I think it’s this period of the game that will determine how far we go in the competition. Our death bowling skills haven’t been sharp enough but we are aware of that and will be working hard to get it right for the South Africa game.

On the batting front we had a few players who got in but didn’t go on to make that hundred we needed. Again credit must go to the UAE on how tightly they bowled and backed it up in the field but it’s a sign of a good team when you win without dominating the game.

We were behind for 80 per cent of the run chase but managed to come good. The way Kevin O’Brien batted turned things. Kev always plays with freedom and it was needed as we were well behind the run rate. His 24-ball 50 changed the momentum completely.

Gary Wilson played a very mature knock at the other end and, credit to those two, they got us within touching distance of the win. And as I said earlier, to be there at the end and hit the winning runs, it’s the kind of thing any youngster dreams about.

The intensity was outstanding and we’ll be better for it. The facilities at the Allan Border field were fantastic with five indoor nets with different surfaces. It also has a full gym, three-lane swimming pool and plunge pool and jacuzzi.

After our sessions we were down to the plunge pool for contrast baths, which weren’t quite as cold as the Forty Foot in Sandycove on Christmas morning, but they still had Andy McBrine swearing profusely.

After a day off and with Marcia clearing away we were back outdoors at the Wooloongabba cricket ground. The Gabba is an impressive venue with a huge playing area. The boundaries last week at Nelson were 60-70 metres, where at The Gabba they can be up to 90 metres from the batsmen. This means less boundaries and a lot of running and brings good fielders into the game more.

These kinds of grounds should suit us with sharp fielding and smart cricket. Myself and fellow spinner Paul Stirling tried to use the big ground to get batsmen caught on the fence and restrict boundaries.

The temperature was much hotter in Brisbane and combined with the large playing field it was a tough test of fitness. The UAE game was also going to be our first day-night game of the tournament and playing under lights can cause different conditions.

In some grounds this can mean the ball moves around more, making it better for bowling, but in other grounds it makes it nicer to bat on.

The lights also make fielding difficult as it can be tough to pick up the ball visually.

Thankfully we had a fielding session the night before the game to get used to The Gabba’s lights and get us ready for the big game.