Frampton: ‘I knew it was going to be a boring fight’ 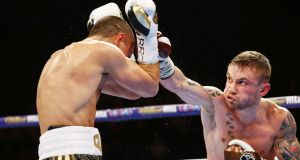 Carl Frampton with Scott Quigg. Quigg claimed to have suffered a broken jaw in the fourth round. ©INPHO/Presseye/William Cherry

It turns out that Belfast is so neat a little town that you can fit a large portion of it into the 20,000-capacity Manchester Arena. Carl Frampton attracted a vocal travelling Irish support to see him unify the IBF and WBA super-bantamweight championships on Saturday night, and he is now considering extending his fan base across the Atlantic and tapping into the large Irish-American market on the east coast of the US.

Having made Belfast his own, Frampton conquered Manchester and Scott Quigg before quickly turning his attention to lucrative Stateside fights.

The unbeaten 29-year-old Tiger’s Bay native became the first Irish boxer in to unify world titles when adding 27-year-old Quigg’s WBA belt to his own IBF super-bantamweight crown with a split-decision points win.

The previously undefeated Quigg, who claimed to suffer a broken jaw from a Frampton upper cut in the fourth round of Saturday’s bout, called for an immediate rematch in his rival’s hometown, but the newly-unified champion has other ideas.

He did not completely dismiss the possibility of another fight with his rival but after claiming a fairly comprehensive win, Frampton wants to move on to “bigger and better things”.

The ‘alphabet’ era of world belts - and the confusion it causes - is often lamentable, but unifying them is an extremely difficult task and Frampton’s two-title success at 122lb means he has achieved a rare feat in becoming the first Irishman to do that.

“I didn’t know, I thought Steve Collins was the first . . . he was the first two-weight champion, was he? Maybe I can go and do that too now at some point as well,” said Frampton after his win, visibly delighted when learning of his historic success.

“I never thought it would ever get this big. When I was an amateur, I would have been one of these guys who would have been happy if I lost a fight but the performance was okay.

“My mentality is changed now and I want to win at all costs and I’m happy to do that now. I don’t ever think about losing now and a lot of that is to do with Barry,” added Frampton, referencing his mentor and manager Barry McGuigan.

Celebrating his 55th birthday in the wee hours of Sunday morning, McGuigan had been handed the ideal gift by his pupil, who delivered a controlled display to defeat long-time rival Quigg.

“I think he is the best fighter Ireland has ever had,” said McGuigan. “I know that is a big, bold statement but we are going to have time to prove that.”

The clash was in danger of failing to match the excessive Sky TV hype at the midway stage as a composed Frampton dictated the pace with his pawing jab while Quigg failed to fire until late on.

The Belfast man’s performance in the middle rounds was technically impressive as he displayed quick foot work, regularly spinning off the ropes and peppering Quigg with shots.

Quigg insisted his jaw injury upset his gameplan, although the Bury native finally came into the fight from the eighth round onwards when working Frampton’s body.

Frampton withstood all of Quigg’s efforts, and while the Englishman admirably battled back, despite his injury - which was not evident to spectators at ringside - it was too little, too late.

One judge, American Levi Martinez, questionably scored the fight 115-113 in Quigg’s favour, while the two remaining officials gave it to Frampton 116-112. This reporter scored it 117-112 for Frampton.

“I knew it was going to be a boring fight, I knew that was how it would probably play out,” said Frampton. “You can’t really say that before it because it is pay-per-view and nobody will buy it! I knew it would be technical like that. I couldn’t believe one of the judges gave it to him.”

Frampton is keen on a fight against Cuban Guillermo Rigondeaux, but McGuigan fancies a date against WBA featherweight champ Leo Santa Cruz of California.

“He [McGuigan] wants to make me as much money as possible and I suppose that’s a manager’s job,” continued the Belfast man in reference to the fact that a Santa Cruz fight is seen as more lucrative.

“But I’ve got the balls and the chin, which is what it would take to beat Rigo,” said Frampton. “I think it’ll happen.”

The undefeated Frampton (22-0) struggled slightly in his US debut against Mexican Alejandro Gonzalez Jr, but the fact that it took place in Texas was not ideal and a date against Santa Cruz on the east coast would be more appealing.

A more immediate fight date for Frampton in Belfast remains a possibility, and he paid tribute to his travelling support, noting the atmosphere in the Manchester Arena was “electrifying”.

After shining in Ireland and the UK, however, Frampton could soon be lighting up New York or Boston.

1 Six Nations: Ireland are contenders but England still the team to beat
2 In Donegal Michael Murphy is seen, simply, as a godsend
3 Owen Doyle: Creeping professionalism of schools rugby a threat to the game
4 Mike Catt hopes to have Irish backs purring in Six Nations
5 Gary Neville in Qatar an exercise in semi-journalism
Real news has value SUBSCRIBE