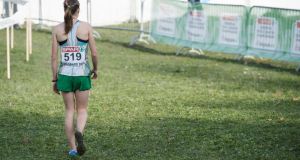 In the end it seemed there was nothing more Fionnuala Britton could have done to defend her European Cross Country title, and yet the competitor inside of her was still insisting otherwise.

In finishing fourth after an exceptionally fast and furious race Britton was justifiably disappointed, although not just because of the three women finishing ahead of her: Sophie Duarte from France underlined the formbook to win the gold medal, five seconds ahead of Britain’s Gemme Steel and the now perennial runner-up Dulce Felix from Portugal, with Britton just four seconds back in the loneliest position of all.

Indeed she’d been there before – fourth in 2010, before winning her back-to-back titles. This time Britton was never actually in a medal winning position, struggling, as she admitted herself, to hit that freewheeling motion over the twisting Belgrade course, and with that clearly lacking the bounce that had marked her winning moments of the last two years.

“Well coming out here I wasn’t going to be happy with just a medal,” she said. “I wanted to win. But then, a medal would still be better than fourth. And I always felt I was here to challenge for the win. I wasn’t here to make up the numbers.”

The problem, however, was that at no point in the race did Britton feel good: it didn’t help that Norway’s Karoline Grovdal exploded the race from the starting gun, before eventually ending up fifth, and what that meant was Britton was always to trying to close gaps, if not cover them.

“Well Grovdal went out very hard,” she added, “and I knew there was no way she was going to keep that up. There was no point lashing it for the first lap or two. But I never felt comfortable. And the race didn’t really calm down at all. I knew the gaps vary early on, but I felt it was my race as much as anyone else’s. I just needed to get back up. And then when I did, I just had to convince myself I was comfortable. But I wasn’t, really.

“And I knew someone was going to make a move around 3km to go. I just didn’t get back up to them soon enough to be able to relax again. And when Duarte went that just split it again. I knew was a threat. Not just this year but that last few years as well. She got it right this time, and I got it wrong.

“Then every time I felt I was gaining on Felix and Steel, because they were battling each other, I wasn’t really getting anywhere. But I didn’t want to burst around the bends. I wanted to wait until there was a bit of a straight. But then the gap was there, and I was thinking I should have gone sooner. And that was so frustrating. I just couldn’t get back onto them. I could see them there, and every so often it looked like they were dying more. And then they’d just go at it again.”

All this came against the back-drop of Britton’s limited race preparation, given the fact she’d missed the entire summer season through illness. Yet she wasn’t using that as any excuse: “Yeah, you could say that. Or you could just say there were better on the day. I was better the last two years. And I’ll try again next year.”

Nor was Britton taking any consolation from the very fact no women had ever before won three of these titles in succession, let alone three: “Well I suppose it’s a good thing that it is that hard. If someone was going out and winning it easy every year I don’t think the event would get much respect. It does feel better when you win something that’s hard. And it feels better when you come back after finishing fourth. At least I know what that feels like too.”

With that Britton has already made it clear that this won’t be the last of her title chances – and at age 29 there will be other days.

The men’s senior race also went to form when Alemayehy Bezabeh, the Ethiopian now running for Spain, won back the title, but there was an encouraging performance by a young Irish team with Michael Mulhare working his way up to 15th overall, and with that helping the Irish team to sixth place overall. In the under-23 race the Irish team were briefly in the bronze medal position but ended up fourth, despite a very good run by Paul Robinson in ninth place.