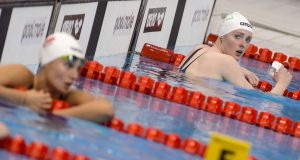 Ireland’s Fiona Doyle after finishing fourth in the final of the women’s 100m breaststroke at the LEN European Swimming Championships at the London Aquatics Centre. Photograph: Andrea Staccioli/Inpho

Limerick swimmer Fiona Doyle finished in an agonising fourth place in the women’s 100 metre breaststroke final as Shane Ryan missed out on advancing to his second decider of the week at the European Swimming Championships in London.

Doyle was pipped to the bronze by Britain’s Chloe Tutton a quarter of a second after a storming last 50 by Doyle from the outside lane left the 24-year-old just short of a medal.

“I’m so disappointed, nobody wants to finish fourth” said Doyle after the race.

Having qualified in last place of the eight finalists it was always going to be a tall order for Doyle to be in the shake-up for a podium finish.

Turing in fifth at the half-way mark, and unnoticed in the outside lane, Doyle began to make her move in the last 50 and looked like sneaking an unlikely bronze medal.

However in a blanket finish for third place, 19-year-old Tutton just got in ahead of Doyle to leave Doyle fourth in 1:07.76 .

“The second 50 went well, it was something that we have been working on in training because that’s where I know that the race is won or lost,” admitted Doyle.

“Unfortunately being in the outside lane you can’t see anything and you just have to hope and in the end it just wasn’t quite enough.

“Look in a way I’m happy its fourth at the Europeans but it was so close to a medal.”

Doyle is back in the pool once again on Thursday along with Ireland’s Mona McSharry competing in the heats of the women’s 200 metres breaststroke.

“I’m just going to try and see what the rest of the week brings and now that I’m in the thick of the action all that’s left is good nerves,” added Doyle.

Ryan broke the Irish record in the heats of the 50 metres backstroke in 25.19 seconds, but couldn’t repeat that in the semi-finals and was classified 11th overall in 25.32 seconds

Ryan, Curtis Coulter and Jordan Sloan are in action in the meets Blue Riband, the men’s 100 metres freestyle on Thursday.

It looks almost certain now that Ireland will just have the three swimmers in the pool at the Rio Olympics as Sycerika McMahon failed to get anywhere near the time required in her top event, the women’s 200 metres individual medley.

The Texas A&M based swimmer, was classified down in 28th place after the heats in a time of 2:17.52 seconds which was well outside the Olympic qualifying time of 2:14.26.

Brendan Hyland would have been disappointed with his return from his top event, the men’s 200 metres butterfly, swimming 2:00.21 in the heats and that was outside a top 16 semi-final berth

Rio bound Nicholas Quinn and Dan Sweeney both failed to advance after the heats of the 200 metres breaststroke while Danielle Hill, who is doing GCSE exams as well as competing in London, didn’t make it out of the 100 metre backstroke heats.