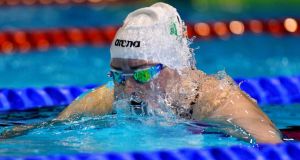 Fiona Doyle secured her place in the 50m Breaststroke final at the European Swimming Championships in Berlin this afternoon but Sycerika McMahon finished outside the top eight.

Doyle, the Irish record holder (30.93 seconds), qualified for the semi-final in a time of 31.63 seconds this morning and the World University Games silver medallist improved on that by 0.33 of a second to finish fourth in her semi and sixth overall.

“It’s a turning point,” said the Limerick woman afterwards. “I’m still a bit disappointed with the time, I’m more than capable of more, but to have the opportunity to have a final swim and to prove that I can turn things around and show the work that I have done, it’s a really nice feeling.

“The final is wide open and hopefully this confidence booster can help me through and who knows what can happen tomorrow.”

McMahon was unlucky not to progress after her personal best 31.02 this morning. She was unable to match that and touched in 31.50, 11th overall.

World record holder Ruta Meilutyte set a new championship mark in the same race as the Irish pair, winning in 29.88.

McMahon will be back in the pool on Sunday for her final event, the 400m Freestyle heats, while the 50m Breaststroke Final takes place at 3.09pm (Irish time).

Dan Sweeney finished his campaign with a lifetime best in the 50m Freestyle. He took over half a second off his previous best of 24.67 to touch in 24.07 seconds.

1 Andy Farrell finds a home from home
2 Tyson Fury king of the world again after he stops Deontay Wilder in the seventh
3 Ireland wary of Peyper calling the tune as they head for Twickenham
4 England v Ireland preview: Ireland’s revival to face its sternest test
5 Confident Fury more than willing to fight Wilder again
Real news has value SUBSCRIBE

Wolves make light work of dismal Norwich 16:34
Limerick’s scoring threat on full view as they close in on semi-finals 16:34
Fernandes inspires Man United past Watford and up to fifth 16:25
Confident Fury more than willing to fight Wilder again 16:13
Railway Union stay on track to win silver at Porto 16:06
Here is your handy guide to sport on television this week