Final Irish Hockey League places up for grabs in Munster

Institute must avoid defeat to UCC to clinch automatic qualification 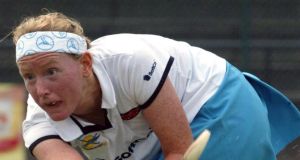 
After the recent flurry of league and cup activity, culminating in Railway Union’s first Irish Senior Cup success last Sunday, it will be a quiet weekend on the hockey front, although the meeting of UCC and Catholic Institute in Cork could finalise the Munster race for places in next season’s Irish Hockey League.

Institute were dethroned as Division One champions last weekend by Cork Harlequins, when the latter beat UCC 2-1, but they can seal the runners-up spot and automatic IHL qualification tomorrow – weather permitting – in their final league fixture if they avoid defeat to the students.

Should UCC triumph, they can take second if they win their two games in hand.

So far, eight of the 12 teams that will feature in next month’s IHL – UCD, Loreto, Railway, Hermes, Pegasus, Ballymoney, Lurgan and Harlequins – have qualified for next season’s competition, with Institute, Old Alexandra and Ards – all still with a chance of doing so. Of next month’s line-up, only Ulster Elks, fifth in their league, cannot qualify again.


Automatic place
Ards can pip Queen’s to the fourth and last automatic place for next season’s IHL if they take a point from their two remaining games in Ulster, but they are against champions Pegasus and Lurgan.

Further afield, Aisling Keane has become – most probably – the first player to claim both Irish and Hong Kong national league medals after the former Hermes stalwart helped Valley HC clinch the league with a 4-0 win over Kowloon – in a match played at 8.30pm in 24 degrees.