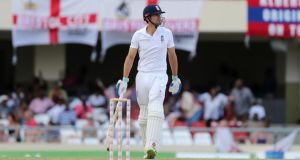 Alistair’s run without a century continued as he was bowled out cheaply again in England’s second innings against the West Indies at Antigua/ Photograph: Inpho

Until Jerome Taylor went on the rampage it seemed as if England had the upper hand in the first Test. On a pitch that appeared to be getting slower by the session they looked to have done well to dismiss West Indies by tea on the third day for 295, despite an excellent, controlled unbeaten maiden Test century from Jermaine Blackwood, who finished with 112 from 220 balls, having benefited twice from England benevolence on the way.

It gave England a first-innings lead of 104 and the opportunity to seize the initiative and push on to gain a significant enough lead to give them time to bowl West Indies out a second time.

Taylor, though, is a fine bowler, not express but quick rather than fast- medium, and he can move the ball waspishly. He destroyed the second England innings six years ago in Jamaica to set up a famous win that ultimately clinched the series. Now, from the Sir Anderson Roberts end, with the wind aiding his swing, he charged in, a whirl of arms in delivery, and in the space of five balls in his third and fourth overs removed first Jonathan Trott and then the England captain, Alastair Cook.

It was challenging stuff. Ian Bell’s first ball whistled past his outside edge and his second all but cut him in half before clearing the stumps, beating the wicketkeeper’s despairing leap and hurtling to the boundary for four byes. It appeared the ground staff had substituted a different pitch during the interval that preceded the innings. Certainly West Indies’ new-ball bowling has been of a higher standard than England’s in this match.

Somehow Gary Ballance survived the examination and, with Bell, was starting to steady things before Bell ran himself out. Instead it was Ballance (44 not out) with Joe Root (32 not out) – beginning to find the boundary as West Indies started to drop short to lift the pressure – who took England to 116 for three by the close with a fourth-wicket partnership so far of 64, and a lead of 220. They still have the upper hand: a lead of 350 may be sufficient.

The demise of the openers, though, leaves Peter Moores none the wiser about the form of Trott, newly returned to the side after his early departure from the Ashes tour two winters ago. If the fears, certainly beyond the England management, were that he might ultimately suffer a bombardment to unsettle him, then in opening the batting he is first going to be challenged by the movement of the new ball. Taylor has produced two extraordinarily good deliveries to dismiss him, each time inducing a stroke and defeating him with late movement, but that is a hazard of opening the batting. He will be getting more of those if he manages to stay the course, although that idea is already in some jeopardy.

For Cook, the vultures that have circled overhead in the past year are still doing so, his three-month enforced sabbatical doing nothing to change that. He desperately needs runs in this series to regain some credibility as one of England’s most accomplished openers but this has not been a good match. His first-innings dismissal was the result of a technical flaw exposed by Kemar Roach, and the second a wide full ball poked tamely to gully, where his determination to re-establish his judgment outside off stump, something that had been a hallmark of his game at his best, was undone by a clear lapse in concentration to judge by his self-admonishment.

When the time comes, England may find themselves relying on the off spin of James Tredwell, maligned by some before the start but proving his value here in only his second Test with 4 for 47, including the most prized wicket of Shivnarine Chanderpaul for 46, all achieved with cleverly flighted off spin, a change of pace and an ability to beat the outside edge by clever use of the crosswind. Beyond that, and a needless run out of a dozy fast bowler as the innings neared its conclusion, the seamers shared the spoils, with Jimmy Anderson two wickets closer to the England record and his brother-in-arms Stuart Broad, who toiled hard to flog something from the moribund surface, producing identical figures of 2 for 67.

When, in the absence of Moeen Ali through injury, they selected Tredwell for this tour, the selectors recognised a reliable performer in the one-day side, who as such could be expected at the very least to do an excellent containing job. That he was left out of the Kent championship side became of little relevance and here he justified that faith. There is something delightfully old fashioned about him, the sort of cricketer whose portrait might once have been on a cigarette card. Hair care products would be considered an unnecessary luxury and he has a slightly crabby action but he has learned his craft well. The conundrum will come for the second Test, with the return of Moeen to the squad.

Through it all Blackwood, in only his sixth Test, played an innings of maturity and, generally, patience which appeared at odds with the impression created when he belted his second ball into the stands. Batting with Chanderpaul would have been an education in itself, a tutorial in timeless application. The first life he was given, after Cook took a slip catch when 21 only for the wicket to be reversed because Stokes had no-balled, was the costliest, but when on 43 Tredwell had failed to hold on to a sharp chance at wide slip, also off Stokes. There were the occasional streaky shots too, once bisecting slip fielders to frustrate Stokes yet again, a stable door that Cook bolted too late. If Stokes did not stint in his efforts then his anger on Twitter the previous evening, in which he seemed to suggest that overstepping was an inevitable consequence of effort, was just naive. He has a lot to learn.