England lead by 264 runs in day of shambles for Australia 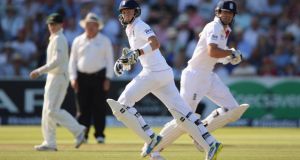 England’s Joe Root and Alastair Cook (right) run between wickets during day two of the Ashes Test at Lord’s. 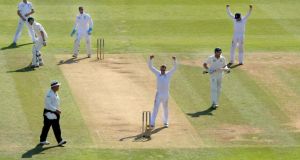 Darren Lehmann cut a solitary figure late in the afternoon at Lord’s. The dressing- room balcony doors were shut, and he sat outside on his own on a bench, contemplating the shambles unfolding before him and perhaps wondering precisely what it was into which he had got himself.

In front of another packed house, in pristine weather, Australia contrived to produce a batting display of such startling ineptitude that as Lehmann sat and watched gloomily, they lost, from the final delivery of the morning session to an hour after tea, all their wickets for 86 runs, 24 of those coming for the last wicket, the second-highest stand of the innings.

Having been splattered around first thing by Stuart Broad and Graeme Swann, and then added 42 for the first wicket in response to England’s 361, it constituted one of their worst Ashes days in this country.

With a lead of 233, a pitch offering sufficient spin already for Swann to complete his 16th five-wicket haul in Tests, and a forecast set fair, any temptation to enforce the follow-on was easily resisted. The idea is to win a Test match rather than a race: given the time available you do not play around with even the remotest possibility of chasing a target on the last day.

It left England 20 overs to bat, which they failed to do without mishap, losing Alastair Cook, Jonathan Trott and Kevin Pietersen, all to Peter Siddle, before Joe Root and Tim Bresnan saw them to the close at 31 for three, sufficient already in all likelihood but with the pot still bubbling.

Although late wickets had meant that Australia shaded the first day, England, thanks to Ian Bell’s century, had still managed to get themselves to the brink of what might be a respectable, competitive total.

Ominous signs
There were ominous signs too when Steve Smith spun his leg-breaks rather more sharply than ought to have been the case, wrist spinner or not, and further indication when Ryan Harris, the pick of the Australian bowlers by a distance, managed to get the ball to seam sharply up and down the Lord’s slope to finish with five for 72. A seam bowler can manage that on a dusty surface.

But no one surely can have foreseen the abject manner in which the innings not just folded, but did so in such demoralising fashion.

In fact the innings got off to a decent enough start with Shane Watson and Chris Rogers encountering few problems beyond the sort of questions asked by Jimmy Anderson and the new ball.

Watson had already hit six fours in his 30 runs when Cook called up Tim Bresnan to deliver the final over of the morning and to his fourth ball Watson played around his front pad and was given out lbw by Kumar Dharmasena.

What went through his mind only he, and perhaps Rogers, know. It looked stone dead but for some reason he decided to review it, a ludicrous decision: it cost Australia a review and in all probability a wicket as well, in what was a bizarre dismissal in any case.

Swann had already given notice by turning one sharply to the left-handed Usman Khawaja immediately after the interval but he required no help from the pitch as the ball slipped from his hand and Rogers, in attempting to belt the resulting dipping, high full toss into oblivion, was struck in the nethers instead, and was judged lbw.

He could, and hindsight will say should, have reviewed it, but Watson’s wicket left Australia with only one review left. In his mind he could not afford to waste it and walked off; the replay showed the ball missing the stumps by a distance.

Phil Hughes then wasted the second review having thrown the bat at one from Bresnan outside off stump and edging thinly to Matt Prior: there was no Hot Spot mark but audio picked up significant noise and subsequently Snicko bore out the correctness of the decision. A chain reaction had begun, in which five more wickets fell by tea.
Guardian Service