‘It’s fantastic, and I really can’t sum up how it feels to be back in an Irish vest’ 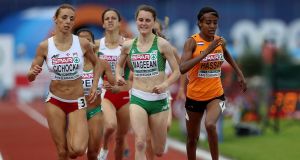 Not every athlete can justify or afford to celebrate making a European Championship final with such deep satisfaction although for Ciara Mageean it’s been a long, long time coming – and indeed some wondered if it ever would.

So now, after five seasons frequently written off through injury, Mageean is back, easing her way into the final of the women’s 1,500 metres in Amsterdam with the sort of style to suggest she won’t be far off the medal mix.

A World Junior silver medallist over the distance, back in 2010, the Down athlete succumbed to one injury after another: this season, finally injury free, she’s redelivering on that potential, taking third place in her heat.

Sifan Hassan from the Netherlands, the gold medal favourite, took the win in 4:13.45, Angelika Cichocka from Poland second in 4:13.47, with Mageean just another stride behind, clocking 4:13.61 to secure one of the automatic qualifying spots.

“It’s fantastic, and I really can’t sum up how it feels to be back in an Irish vest,” said the 24 year-old Mageean, her final set for Sunday (5.45pm, Irish time).

“I’ve been welling up, just thinking about the occasion it is. For me, 2011 was my last Irish vest, and some people have been saying sure she’s still there or thereabouts, but nothing compares with being out there on the stage, with the green, white and gold on your chest.

“I can’t say I missed the nerves, but I sure as hell missed that buzz of racing, and just getting stuck in. It’s not a tidy race, and I had to check with myself and another few athletes, a few times, but that’s what championship running is about, and that’s what I feel ready for, and so looking forward to the final now

Indeed that old feeling of waiting around for something only for it to arrive in timely fashion also proved true, as earlier in the day, all three Irish women in the 3,000 metres steeplechase qualified for their final, the first such Irish athletes to progress. All three women did convincingly too: Michelle Finn was first to book her place in Sunday’s final (5.15pm, Irish time), finishing fourth in her heat in a season best of 9:45.93, the first five assured of going through.

“I ran much better than my earlier races this season and coped better with the number of athletes around the barriers,” said Finn. “I feel remarkably good afterwards so we’ll see what happens in the final.”

Sara Treacy ran even faster in her heat, the Meath athlete finishing fifth in a new lifetime best of 9:42.16, finishing fifth. Right behind her came Kerry O’Flaherty in sixth, who also ran a season best of 9:45.53, good enough to send her through as the first non-automatic qualifier.

It’s in keeping with the spirit of the three women too given they all ran their Rio Olympic qualifier in the same race last summer. “I knew I had a personal best in me from training,” said Treacy afterwards. “I’m really pleased with that and looking forward to the final.” O’Flaherty was equally pleased: “That’s a big step forward and it’s great to get all three girls into the final.”

Finn, who runs with the Leevale club in Cork, looked comfortable throughout her heat, won by the German Gesa Krause in 9:43.81. Likewise with O’Flaherty and Treacy, who had the benefit of being involved in the faster heat and therefore always looked likely of qualifying.

Treacy’s 9:42.16 improved on the 9:44.15 she ran to qualify for Rio last summer, and certainly justifies her decision to take time off from her medical career to focus on Rio.

For O’Flaherty, the Down athlete who runs with Newcastle AC, it also continues her excellent progress of late: the 34-year-old had been moving in on qualification for the London Olympics, only to fall short, but enjoyed an excellent season last summer.

Christine McMahon sounded equally pleased to advance to the semi-finals of the women’s 400m hurdles (set for Saturday, 8.20pm Irish time) after finishing fourth in heat four in 57.73. “I made one or two mistakes towards the end but the point is to get through and I did that,” she said.