Formula One supremo has been indicted by prosecutors in Germany 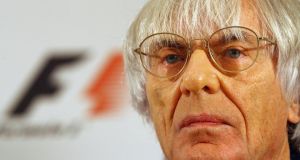 Bernie Ecclestone’s hold on Formula One, as the sport’s chief executive, commercial rights holder and for almost four decades its most dominating personality, could be loosening with the news that he has been indicted by prosecutors in Germany investigating allegations of bribery.

Ecclestone, who will be 83 in October, confirmed the news on Wednesday when he said: “I have just spoken to my lawyers and they have received an indictment. It’s being translated into English.”

Ecclestone added: “We are defending it properly. It will be an interesting case. It’s a pity it’s happened.”

He described the serving of the indictment as “inevitable,” adding “If someone wants to sue you, they can do it and you have to defend it.”

The news came as Ecclestone’s representatives attended a court hearing in London to fight claims that he had undersold the broadcast rights to F1 to CVC Capital Partners, the private equity company that has a controlling interest in the sport.

The bribery allegations have been hanging over Ecclestone’s head since the jailing, for eight and a half years last year, of Gerhard Gribkowsky, the BayernLB bank executive who was found guilty of taking €34m in bribes and failing to pay tax on the money.

Gribkowsky said he received the money from Ecclestone in 2006 and 2007 in relation to the sale of F1 rights to CVC.

Ecclestone, who has repeatedly denied any wrongdoing, said he paid the money because Gribkowsky had threatened to blackmail him.

Ecclestone has said that he could be removed from his position in charge of F1 if found guilty. But, in a sense, his guilt or otherwise is not the problem for F1 right now.

It is the prospect of Ecclestone being dragged through long months of court proceedings, a major distraction as the sport plans a flotation in Singapore.

CVC are already believed to have drawn up a shortlist of possible successors to replace Ecclestone. That was more to do with his age than anything else. Now CVC and the sport has a lot more to worry about. Guardian Service