Dublin Marathon: Debele Tulu and Ciobanu both have reasons to be cheerful 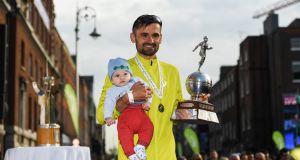 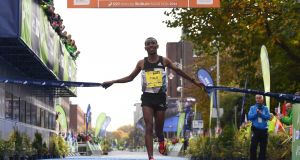 Rarely has the Dublin Marathon been won with greater ease or indeed authority, and such was Dereje Debele Tulu’s look of apparent effortlessness at the finish he may well have been enticed into a lap of honour.

Just as rare though was the look of satisfaction on the face of Sergiu Ciobanu when he crossed the line seven places back as the first Irish finisher and with that winning the national title for a fourth time. This didn’t quite make up for missing out on selection for the Rio Olympics but it was sweet consolation nonetheless.

The 31-year-old, originally from Moldova but living in Tipperary since 2006, and now married to a Kildare woman, completed his transfer of allegiance last year, but found himself a victim of some controversy when Athletics Ireland by-passed him for selection for Rio, opting for Paul Pollock, even though Ciobanu had run a marathon qualifying time 24 seconds faster.

His 2:17.40 here in Dublin was some two minutes off his best, though clearly for Ciobanu it was all about getting to the top of the national marathon podium. Tulu’s winning time of 2:12.18 was beautifully smooth and apart from the slight scare of swerving to avoid a parked motorcycle shortly after the start – along with some other leading contenders – there was simply no stopping the 30-year-old Ethiopian, who earned the top prize of €12,000 in what was his 15th marathon in the last seven years, including two already this year.

Ciobanu however had a battle on his hands to win the Irish prize purse of €3,500, last year’s national champion Seán Hehir sticking with him until around halfway and also chasing hard to the finish, taking second in 2:18.45, with Raheny’s Mark Kirwan finishing strongly and claiming the third podium spot for the Irish finishers with his 2:22.17

“Look, the pressure was on, after what happened the last few months,” said Ciobanu. “ I’d been training for Rio for over a year, then had to change my plans, when I wasn’t selected. But I had to stay focused, because I love this sport, and I was getting so much support, Seán was chasing hard behind me, so it was a hard race.

“But it’s an unbelievable feeling, so special, because I really did want to win this race.”

At the time of the Rio selection, last May, Ciobanu said he “felt like the fact I was born in Moldova is what cost me my place” and that “I feel like if I was born in Ireland, in the sticks, I would have been selected.” He also added: “It’s disgusting to see that rules were not respected. I trusted an Association which I lost respect for.”

A statement from Athletics Ireland at the time said they “categorically and completely reject any inference that an athlete’s background was in any way a factor in the (selection) decision”. However there are no hard or lasting feelings: Pollock, who was selected ahead of him, finished 32nd in Rio and Ciobanu certainly has no complaints about any of that now.

“I have already represented Ireland three times, in the last 10 months. I’m in Ireland now 10 years, my wife is Irish, and we have a child now, so it means so much to me to represent Ireland, and I really mean it.

“But personally I had nothing against the federation, I know many people who work in there, and get on well with them. And I look forward to working on with Athletics Ireland and representing the country.

“And I had nothing against Paul, I respect him as an athlete. I was only talking about myself. That was all. He had a great run in Rio. So did the other two guys. There were the lucky ones. I wasn’t. But things like this will never affect my love of running. Never. I coach and advise some athletes in Tipperary. I love the scene here, and I got great support, and that gave me the inspiration too, to keep going.”

The now 33-year-old also hinted that he certainly intends on pushing for selection again for Tokyo 2020, even it that will probably mean running under 2:15. Ciobanu was the third fastest Irish qualifier, his 2:15.14 run in Berlin 2015, 24 seconds faster than Pollock’s best of 2:15.38, also in Berlin.

Hehir, 31, declared himself happy with second place though not so much the time, although Kirwan was beaming at making the Irish medal podium in third after clawing back several winners in the closing miles, a first national podium finish in 10 years for the Raheny man since winning the steeplechase title in 2006.

Kildare’s Patrick Monahan defended his wheelchair title for the third consecutive year in his fastest course time ever of 1:39.18, with a comfortable advantage over Richie Powell from Wales (2:06.54) and John McCarthy (2:48.29). A record entry of 19,500 produced a record number of finishers too but like any race there can only be one winner. Tulu made sure of that.

The women’s outright winner was Helalia Johannes of Namibia, who repeated her Dublin victory of 2011 after a hard-fought battle with Ehite Gebireyes, her winning time 2:32.32 just one second ahead of the Ethiopian, who had been setting the pace in the closing miles.

The first Irish woman was Laura Graham from Newry, a latecomer to marathon running but at age 30 ran an excellent 2:41.54, finishing 10th overall. Caitriona Jennings was one place back in 11th in 2:44.59, with the 47-year-old Pauline Curley making the Irish medal podium for an incredible 10th time with her 2:48.38.

1 Worst sporting moment: White knuckle ride on a hate-filled night at Windsor
2 Dan Martin fractures bone in his back but still hopes to ride Tour de France
3 Irish roots with the bit of Jo’burg dog: Curtis Campher has arrived
4 Rugby to return in England with rucking but no hugging
5 Irish Open confirmed for Galgorm Castle in September
Real news has value SUBSCRIBE