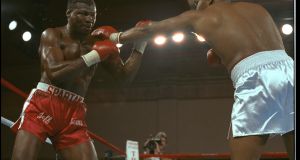 Jeff Sims (left) in action against Tim Witherspoon in Atlantic City in January 1990, three years before he was shot dead outside a Miami store

One Saturday afternoon in March 1980, Muhammad Ali, the most famous alumnus of Miami’s Fifth Street Gym, was in town campaigning for president Jimmy Carter and readying for a possible comeback bout against WBA titleholder John Tate.

From the moment he came up the stairs, Ali was mouthing off about his intention to become the four-time heavyweight champion of the world, and when he went to get out of his street clothes, a young contender saw an opportunity.

“I tried to do his routine,” said Jeff Sims. “I wanted to intimidate him. I went over and pounded on the dressing-room door and yelled for him to come on out. He told Mike Dundee (one of Angelo’s brothers) he was going to kick my ass. During the sparring session, he kept talking to me. He told me he was gonna run me right out of the ring. He told me, ‘So you think you’re bad in Florida, well I’m bad all over the world.’”

Ali taunted the 26-year-old because he knew Sims had an upbringing that, even by boxing standards, was especially hardscrabble. Born and raised in the maw of rural poverty in Florida, he was picking tomatoes and cucumbers as a seasonal migrant worker for 10 cents a crate when he was eight years old. By 12, his mother was dead, his father vanished and he was left to his own devices. At 16, he was shot for the first time. In the head. A year later, he killed a man.

Sims served seven years for manslaughter at the Belle Glade correctional institute. He had always known how to fight but, behind bars, he learned to box under the tutelage of a fellow con named “Duck”. Evincing enough raw talent for the warden to allow him leave the jail on furloughs to compete, Sims was crowned heavyweight champion of Florida’s prison system.

Upon release, he fetched up on Fifth Street where the Dundees recognised potential, and he was 9 and 0 as a pro when he went five rounds with the 38-year-old Ali. “I was thrilled just to get the chance to box with him,” said Sims afterwards. “But then he made me mad. He called me a nigger. I told him I’d deck him for that. We really got it on. He’s still got something left. He looks to me like a pain freak. The more I hit him the more he wanted. I hit him with some knockout punches, a right to the head, a left to the head, a double left to the body.

“I him more than I ever hit anybody. I didn’t want to just put him down. I wanted to bust his ribs, his head. He called me nigger again, and I called him an Uncle Tom for (president) Carter. Then, as he was backing up, I caught him with a left hook and busted his lip. As soon as I saw it was cut, I quit.”

In the official version of the story, shortly before Sims hit him, Ali had spat out his gum shield so he could trash-talk in a more pronounced fashion and that exacerbated the damage done. Whatever happened, this was a serious enough cut to require 10 stitches and left such a telling scar Ali grew a covering moustache, an accoutrement he told reporters made him look like “Dark Gable”.

Beyond the joking, his right cheek and right eye were also swollen badly after the bout, tell-tale signs adding to the growing belief Ali no longer belonged anywhere near a boxing ring.

Having briefly gained national notoriety, Sims lost to the experienced Earnie Shavers on the undercard of Ali’s final fight against Trevor Berbick the following year, and his progress was constantly stymied by an unhappy knack for finding trouble.

In 1982, by which time he had breached the top 10 rankings, an argument with a flat-mate about household chores put him out of action for eight months.

Later managed by Sylvester Stallone’s boxing outfit, Sims sparred with a young Frank Bruno in upstate New York in 1983. He presumed the Englishman was gay because of his impeccable manners while Bruno marvelled at his opponent’s battle scars and torrid tales from the prison yard. Back in jail before the decade was out, Sims was shot dead following an argument outside a Miami grocery store in 1993.

“Jeff’s my friend,’’ said Renaldo Snipes, another heavyweight contender, back in 1982, ‘’but I told him I don’t want to be walking down the street with him. He attracts lead.’’

He attracted lead. The epitaph of a streetfighter.