Dan Martin’s Tour diary: A rest day is not much of a breather 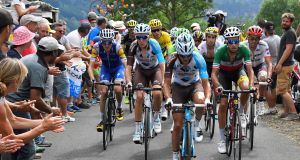 It’s been fun for me to sneak up on general classification on Fabio Aru, Chris Froome and Romain Bardet. I ended up taking back another 14 seconds off them in Sunday’s stage and moving up one place overall to fifth. Photograph: Bernard Papon/Pool

Monday was the second rest day of the Tour, and it was welcome. I’ve been racing hard, after all, going clear in a late attack on Sunday’s stage and getting back some more time on those who are ahead of me in the overall.

I was basically just looking for opportunities again when I made the move. I am very aware that the top four guys on GC are very closely packed, with just 29 seconds between the four of them. So I had a feeling that if I got a gap, that they were going to be watching each other rather than riding hard to catch me.

When I went, it was a spur of the moment decision. It was so hard up the climb that everybody was really tired at the top. The downhill afterwards was pretty easy. We came up the big road and there was a stall. I thought to myself, `there is a downhill to the finish, I have got nothing to lose'. So I went, attacking hard.

I lost a chunk of time due to that crash last Sunday week, but I have been sneaking back up on them ever since. It has been fun.

I felt there was minimal risk. Even if they had got me back, there wasn’t much of a chance that they would drop me that close to the finish. Anyway I was quite confident that if I got a gap that I could hold it to the finish line, and that’s how it worked out.

I ended up taking back another 14 seconds and moving up one place overall to fifth. I am now one minute and 12 seconds behind the race leader Chris Froome, 54 seconds off the rider in second, Fabio Aru, and 49 seconds behind Romain Bardet.

I lost a chunk of time due to that crash last Sunday week, but I have been sneaking back up on them ever since. It has been fun.

In truth, I’ve always enjoyed the tactical side of racing. I think there are similarities with my uncle Stephen Roche, who was also known for that.

Monday’s rest day gave us a chance to take a breather, although it wasn’t much of a rest. I’ll describe what I did and you’ll see how busy it was. At 7.30 I had a knock on the door for doping control, which wasn’t an ideal time when you are trying to catch up with sleep. That was done by eight o’clock, but it was too hard to go back to sleep. I tried, but I ended up getting up for breakfast at 8.30.

After I’d eaten I came back to my room and did some stretching and mobility exercises for my breathing and my back. I’ve been working really hard on this since my crash, and it has been an important step in my recovery. I then closed my eyes for a little bit, grabbing a 20 minute catnap before being called by a friend. After that call was done I called my wife, and then got ready for our training ride.

Some people might be surprised that we don’t rest, but in truth if you just stop on a rest day your body just seizes up. We went for a ride in the hills around the hotel, and fortunately it wasn’t too hot.

The pace was pretty brisk – you have to go hard on these rest day rides to keep the system moving. So I put in a few efforts, sprinted up a couple of climbs. I even went for a long effort on the flat as Wednesday’s stage is that sort of profile. I wanted to keep the body used to pushing the big gears and going fast.

In total the team did an hour and 10 minutes, while myself and Jack Bauer went off for an extra half hour together afterwards. We have been a good friends for a while now, so it was nice to just catch up a bit. Although we’ve spent two and half weeks on the road together, you don’t really have much time to talk. So it was nice to catch up a little bit.

When we got back to the hotel we hung out with David Millar and Ned Boulting, who both work on the Tour TV coverage on ITV 4. David is a good friend of mine from our days as team-mates and it was great to chat for a while

In terms of food, we kept it simple: we had a bit of salad and some potatoes and chicken.

That was followed by some media stuff, although we didn’t really have a full press conference. I had a TV interview with the American company NBC, and I also had a Belgian film crew following me around all day. They were doing fly on the wall stuff for a show that was going out later in the evening.

We didn’t get to the hotel until nearly nine o’clock and, by the time we had massages and started dinner, we didn’t finish eating until 11.

After that, I had a roundtable chat with a selection of journalists, then came back to my room for a quick sleep before a massage and some physio. That was followed by a photoshoot for the Latexco company, a sponsor of ours who supply the mattresses we bring and use in each hotel we stay in.

After I finish writing this diary I’ve got another interview to do, will jump in the ice bath we bring with us in a special camper van, then get dinner and try for an early night.

That will be welcome after last night: we didn’t get to the hotel until nearly nine o’clock and, by the time we had massages and started dinner, we didn’t finish eating until 11. Once again it was a very late night on the race, and so it is nice to be able to catch up on a little bit of sleep.

Looking ahead, there are some very nervous stages coming up before Saturday’s time trial. There are two days that people regard as flat, but I think they will probably have crosswinds and things could split apart. They could end up being very difficult and possibly decisive, and so it will be important to pay attention.

We’ve also got two big mountain stages in the coming days. Wednesday’s summit finish on the Izoard is very high, with the finish line at 2,360 metres, but the final mountain on Tuesday, the Col du Galibier, is even higher. It is 2,642 metres and with the steepest part of the climb coming at the end, it is going to be an incredibly difficult stage.

There is potential for guys to really explode and lose a lot of time, particularly as there are 28 kilometres to the finish line after the summit.

People are asking if my podium dream is still alive. Personally, I have never like the word “dream” as I think it implies it is not achievable. Why shouldn’t it be? I lost one minute 15 seconds in my crash on stage nine and am now one minute and 12 seconds behind Chris Froome. I would in theory be in yellow had I not crashed.

I am one of the strongest riders in the race at this point, and know I just have to keep up the consistency, remain healthy and stay safe. Physically, I can definitely finish on the podium. I think anything is possible in Paris.

The question is, what is actually going to happen? It has been such a dramatic race so far that nobody can predict anything. Anything could happen in these next few days, and that’s pretty exciting.