Dan Martin’s Diary, Stage 18: Everything changes when you are sick

‘It is just an unfortunate set of circumstances. I picked the worst day in the Tour to get sick.’ 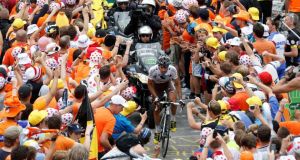 Well, that certainly didn’t go to plan. On the most famous climb in cycling, on the day when I’d be riding past a thousand Irish fans on Alpe d’Huez, my aim of taking my second stage win in this year’s Tour de France fizzled out due to illness. As I write this I’m pretty wasted, coughing and feeling sick, and wishing that things had worked out differently.

However when we hit the first climb, my legs and my whole body were just empty. It was just a fight for survival. I wasn’t coughing or anything then, but every muscle in my body was hurting. I was dripping with sweat, yet I was cold at the same time. It was just something really not going right with my body.

I pushed on and was well positioned at the top of the Col d’Ornon, the climb before Alpe d’Huez. I knew the downhill would be technical and that you needed to be at the front to be at the bottom of Alpe d’Huez in good position.

However when we came out onto the big road at Bourg d’Oisans, just before the climb, everybody started going hard to get to the foot of the Alpe in the best place. I just lost my place, I didn’t have any power in the legs at all.

Normally I would have been right there at the front at the bottom of the climb, but I ended up being really badly positioned because I didn’t have any energy.

It meant that I was off the back and in a group when we were approaching the huge numbers of Irish fans at corner ten. I had hoped to be right up there at that point but it wasn’t to be. Still, it was incredible to ride past them – I jumped away from the group I was with beforehand so I could really enjoy it and give something back to them.

They all came over to see myself and Nicolas and unfortunately I couldn’t put on a show. But that is what made it so incredible – I know they all appreciate the fact that I wasn’t 100 percent and I would have been at the front if I could have been. They still gave a great reception regardless.

Unfortunate
It is just an unfortunate set of circumstances. I picked the worst day in the Tour to get sick. But it also does explain why my time trial was so bad on Wednesday, despite it being on a course that suited me. I had a similar feeling in my legs on Alpe d’Huez, I just couldn’t go hard at all. My body was just not responding to the effort I was putting in.

People might wonder why riders can be so affected by illness on the race. The Tour de France is such a demanding event that when you are riding it at anything less than 100 percent, it really holds you back.

What I have got now probably wouldn’t affect the normal person too much, but the issue is that I am trying to race my bike for five hours a day.

Over time, during the course of the Tour, your immune system takes a hammering and it makes you more susceptible to picking things up.

The team does what it can to minimise the chances of that happening. We have a chef that cooks food for us, thus cutting down on the risks of food poisoning. We also use hand sanitizers regularly to stop us picking up germs.

However we are changing hotels nearly every night and often stay in these old places with air conditioning systems that haven’t been cleaned out for a long time. You don’t know what is flying around. All you need in a little chink in the armour and a bug can attack, especially at this stage of the race.

My plan now is to try to rest up, eat well and get a good night’s sleep.

Virus
My legs didn’t feel bad during massage this evening and so that gives me a little bit of hope. We think this is some kind of virus but I’m hoping to get through the next stage okay.

Maybe I won’t be at 100 percent, but if I can finish then perhaps I can try to do something on Saturday’s final mountain stage. It depends entirely on how the body responds.

Unfortunately this means I’ve lost my chance at finishing in the top 10 overall this year. The bigger disappointment was not being able to try to fight for the stage win on Alpe d’Huez, but that general classification is also on my mind. However without this little setback I’m confident that I would have been top 10 in Paris.

I had started Thursday’s stage 10th overall and I think if I was healthy, I would have moved higher. That and my stage win give me a lot of confidence for the future.

I’m 26 now, I should keep improving and I’ll probably be at the start of the Giro d’Italia in Belfast next year aiming to be right at the front of the race. This is a bit of a setback, but the future’s still good.